Save The Knoll Victory Day

On September 19, community members marched in support of the protection of the Ohlone burial site unearthed on August 2 at the construction site operated by KB Home at Market Street Field in Santa Cruz. The march was planned to occur while the Ohlone elders were in discussions with the City of Santa Cruz and representatives of KB Home at City Hall. Beginning at Mission Plaza, near the Catholic Holy Cross Church and the half-scale replica of the Santa Cruz Mission, marchers made their way through downtown Santa Cruz and on to City Hall where they demonstrated outside during the important discussions. An intense session of drumming was held which was on the level of a prayer ceremony, and eventually Ann Marie Sayers, who was named the most likely descendant of the Ohlone remains that were unearthed, emerged from the meeting to declare to all present that, "the Knoll has been Saved!" Community members were elated, and many spent the time exchanging hugs while the drummers continued to drum and celebrate.
The terms of the agreement are still being worked out, but agreed on so far is that the five burial sites found on the Knoll will have the remains returned to them after which they will be sealed and protected from construction, and a permanent easement will be established that will allow for ceremonial visitations by the Ohlone elders. 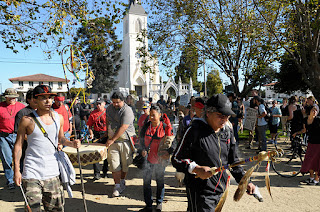 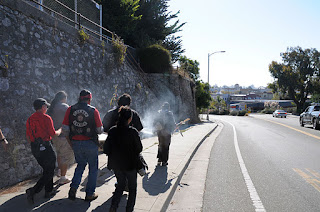 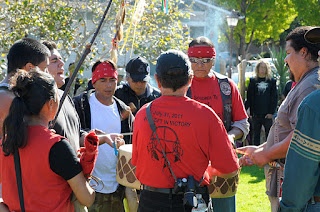 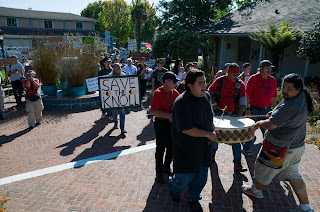 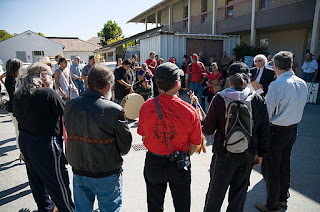 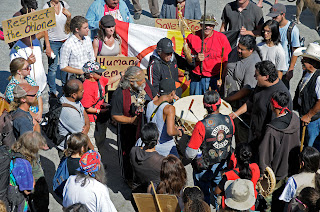 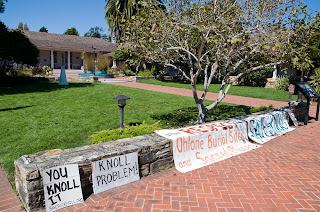 For more details about the deal that was struck between the Ohlone elders, the City of Santa Cruz, and KB Home, see:
http://savetheknoll.org﻿
Posted by Alex Darocy at 10:16 PM No comments: