The 40th community sleepout to protest laws that criminalize homelessness was held at Santa Cruz City Hall on April 12. 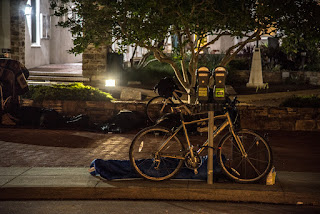 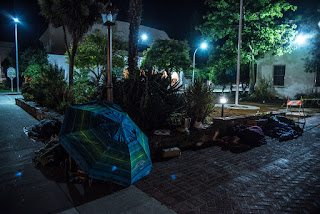 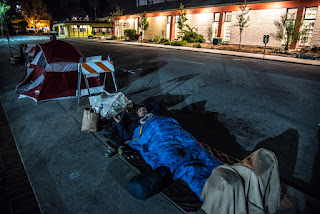 Since July 4, individuals have been protesting laws they feel are discriminatory by breaking them. The primary law they oppose is the camping ban, which prohibits sleeping in public between the hours of 11 pm and 8:30 am within the City of Santa Cruz.

As a group, their goal is to stay through the night and sleep at City Hall. Some of the participants have homes of their own and some do not. Many call themselves "Freedom Sleepers."

The Tuesday night sleepouts have become a destination point for many people on the street. Some return each week to sleep with a group. Others pass by quickly to grab a bite to eat. Many hope to find a blanket or some form of bedding. Supplies are often limited, however, and some people wind up sleeping directly on the sidewalk with nothing.

Posted by Alex Darocy at 3:39 PM No comments: