On the rain-swept evening of March 8, the Santa Cruz City Council voted 5-2 to re-affirm the city's camping ban, which outlaws sleeping in public with or without bedding, and prohibits sleeping in cars, between the hours of 11pm and 8:30am. Supporters of the "Right to Rest" had hoped the city council would remove references to the word "sleep" from the ordinance, but the majority of council members voted to keep the law exactly as it is presently written. Shortly after the vote concluded, it was business as usual for the Santa Cruz Police Department, whose officers spent the evening issuing citations and targeting homeless people sleeping downtown.

A large group of community members spoke to the city council in favor of amending the camping ban (section 6.36.010 of the municipal code). The meeting was adjourned immediately after the conclusion of the camping ban vote, at about 10:30pm.

At about 11:45pm, SCPD officer Dominique Hohmann and another officer with the department cleared the downtown post office of the homeless people who were sleeping there, citing two individuals. One of the individuals was told by police she was being cited for trespassing. At no time did either of the two officers offer the people they cited at the post office any information on where to find an emergency shelter or how to receive social services. 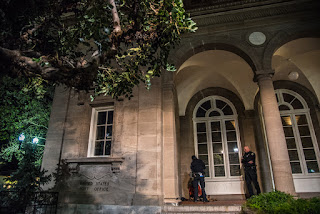 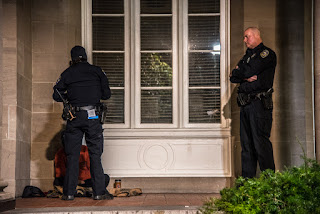 At about 12:15am, one of the same officers who was citing people at the post office was at the Boys & Girls Club, citing two individuals for sleeping near the club's front entrance. The officer informed the men they had a certain number of minutes to gather their belongings and leave the area.


Shortly after 3am, SCPD Lieutenant Bill Azua and officer David Gunter arrived at Santa Cruz City Hall after they were called by a First Alarm security guard to eject a single woman who was sleeping under the building's eaves on the brick walkway that leads up to the city's main offices. The security guard had begun to clear the walkway of three other sleepers seeking shelter from the rain, but was unsuccessful in his attempts to get the woman to leave. She did leave, however, after Azua spoke with her.

At no time did the Lieutenant ever offer any of the people he moved along at City Hall information on how to receive social services or any shelter services. The woman had been asleep using a single blanket. 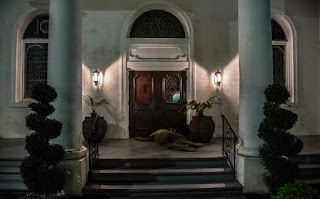 At 6:45 am, SCPD officer Nicholas Kramer cited multiple homeless people who were sleeping along the edge of the Cedar parking garage.

One man sleeping next to the sidewalk on the Walnut Avenue side of the garage was issued a camping citation. He was asleep when officer Kramer approached him. The space he occupied was small, and the only equipment the man was using was a thin sleeping pad and a sleeping bag.

At no time did officer Kramer offer the man cited near Walnut Avenue any information on how to receive shelter services or any other social services. 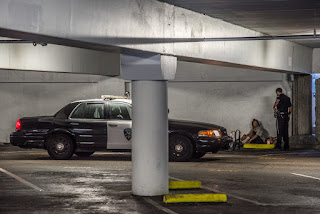 The homeless woman who was displaced by police at City Hall eventually joined the Freedom Sleepers, who were participating in their 35th community sleepout a few feet away.

Since July 4, the Freedom Sleepers have been sleeping at City Hall one night a week to protest local laws that criminalize homelessness.

Before she was moved by police, the woman was sleeping under the eaves of City Hall, a location that was dry and sheltered from the wind and rain. When sleeping with the Freedom Sleepers on the open sidewalk, she was directly exposed to the elements, where she was rained on for two to three hours.

The Freedom Sleepers choose to sleep on the sidewalk in front of City Hall, because it is a location which leaves them largely safe from the police. During rain storms, however, some Freedom Sleepers without tents migrate to the dry areas of City Hall, which is closed to the public at night. Sleeping there places them at a higher risk of interacting with police.

One of the homeless men moved along from City Hall at 3am by First Alarm and the Santa Cruz police eventually made his way about a half a block away to the front entrance of the Prophet Elias Greek Orthodox Church, where he slept until daybreak.

There was some irony in this, considering a member of the church's parish council spoke before the city council only five hours earlier in favor of maintaining the camping ban as it is.

Sophie Polychronakis, the vice-president of the parish council, told city council members the proposed changes to the camping ordinance wouldn't affect the church directly because they are a "private entity" and they can call police to have people removed from their property, which is marked with several no trespassing signs.

Changing the ordinance, Polychronakis stated to the city council, "may even create even bigger problems."

It is unclear if the parish council of Prophet Elias knows how many people are pushed towards their property by the move-along laws the church supports.

Community members in support of the farmworkers who grow Driscoll's strawberries organized an informational picket outside of Whole Food Markets in Santa Cruz on February 26. Demonstrators are calling for the boycott of Driscoll's Berries and Sakuma Bros. Berries, as well as Häagen-Dazs brand ice cream. 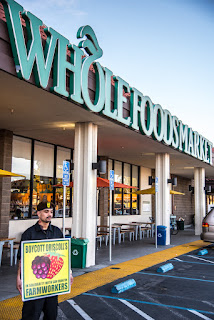 The boycott of Driscoll's has been initiated in response to the poor treatment of the farmworkers who grow the berries in San Quintín, Mexico, as well as at Sakuma Bros. Berry Farm in Burlington, Washington.

Michael Gasser, a Santa Cruz based organizer in support of the boycott, has said that the primary demand is for Driscoll's to negotiate a fair contract with the workers' unions, which so far the Watsonville based company has been unwilling to do.

In March and April, the workers' unions are organizing a tour of the west coast to raise more information about the boycott, and to build solidarity wth other food justice movements. 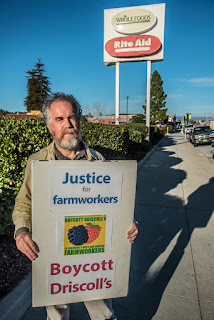 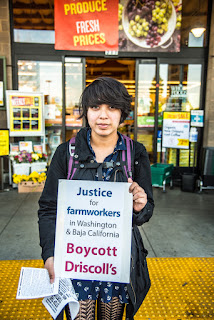 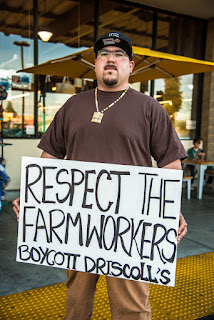 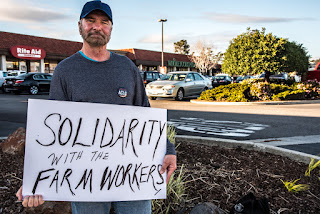 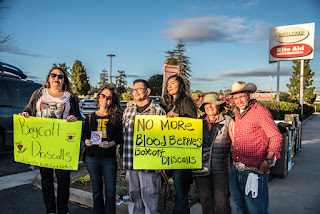 Posted by Alex Darocy at 9:57 PM No comments: