Residents in Santa Cruz gathered at the Town Clock on September 13 as part of a national day of action to oppose the construction of the Dakota Access Pipeline, and to support the Standing Rock Sioux and the Native Americans protecting the land and the water near the tribe's land. "Join us to call on President Obama to instruct the Army Corps of Engineers to revoke the permits for this dirty oil pipeline," an announcement for the event in Santa Cruz read. "The movement to stop the Dakota Access Pipeline is growing stronger by the day, and it's time for all of us to rise up and play a role in this fight - no matter where we live. " 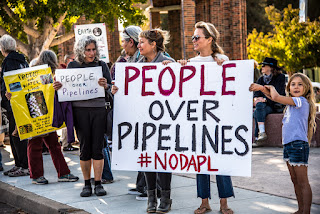 The rally at the Town Clock, which was organized by the Earth Democracy committee of the Santa Cruz Women's International League for Peace and Freedom, brought together a large, energetic crowd. As rush hour traffic passed by, community members held signs inscribed with statements of solidarity with the Standing Rock Sioux Tribe, and others, such as: "Mni Wiconi - Water is Life," "People Over Pipelines," "Make America Native Again," "Protect the Soil - Stop the Oil," "Keep it in the Ground," and "Clean Water is A Right! No More Broken Promises!"

The Dakota Access Pipeline (DAPL) project, also known as the Bakken pipeline, is a $3.8 billion project to build a 30-inch diameter pipeline to carry oil 1,172 miles across four states: North Dakota, South Dakota, Iowa, and Illinois. If built, the pipeline is projected to transport approximately 470,000 barrels of oil per day, with a capacity as high as 570,000 barrels per day or more, from the Bakken and Three Forks oil production areas in North Dakota to Patoka, Illinois.

The construction of the pipeline has been widely opposed for a number of reasons relating to its impact on the environment.

Environmental destruction is occurring at the location of the oil fields due to the fracking process of oil extraction. Waterways and the land the pipeline will cross are at risk due to the likelihood of oil spills, which will also have health effects on residents living near the project. Additionally, use of the oil that passes through the pipeline will have an effect on climate change, and will increase dependence on fossils fuels.

The project is also opposed because the ongoing construction has violated the land rights of sovereign Native American tribes by crossing ancestral lands without the proper consultation of tribal groups. The construction process has also desecrated Native American sacred sites and burial areas.

Environmental groups say the the pipeline project is not about energy independence, but about big business because the oil will most likely be transported to the Gulf Coast and exported.

The Bakken Shale formation of oil deposits, located between Montana and North Dakota, is estimated to contain as much as 4.3 billions barrels of oil, possibly more. Through hydraulic fracturing, or fracking, oil production in the formation reached 80 million barrels in 2009, making North Dakota the second largest oil producing state in the United States, behind Texas.

Oil production at the Bakken Formation is so high it has a global effect on human health and the environment.

According to a study led by the University of Michigan, about two percent of the ethane emitted into the atmosphere worldwide is emitted by the Bakken Formation. Ethane is a pollutant that impacts human health negatively, and raises the temperature of the atmosphere.

“Two percent might not sound like a lot, but the emissions we observed in this single region are 10 to 100 times larger than reported in inventories,” said Eric Kort, a University of Michigan assistant Professor of Climate and Space Sciences and Engineering who co-authored the study.

“They directly impact air quality across North America,” he said. “And they're sufficient to explain much of the global shift in ethane concentrations.”

The oil fields themselves directly impact the Mandan, Hidatsa, and Arikara Nation of the Fort Berthold Indian Reservation in North Dakota.

Over the summer, a youth group organized on the Standing Rock Indian Reservation named ReZpect our Water brought a petition to stop the pipeline to the U.S. Army Corps of Engineers.

"Oil companies keep telling us that this is perfectly safe, but we’ve learned that that’s a lie: from 2012-2013 alone, there were 300 oil pipeline breaks in the state of North Dakota," the petition states.

In Iowa, the pipeline will cross all major watersheds, including many with waterways that are already impaired.

Since construction began, Native Americans representing hundreds of nations and tribes, joined by Indigenous people from around the world and other supporters, have gathered in North Dakota to engage in actions to protect the water and the land. Many more tribes have sent letters of support to the Standing Rock Sioux as well as financial donations and goods. At the pipeline site in North Dakota, a number of people have locked themselves to heavy machinery in civil disobedience. Actions to oppose the project have also been held in the other three states the pipeline is proposed to cross.

Last week, three federal agencies announced that a short length of the pipeline construction would be temporarily halted near the site of the Standing Rock actions. Construction has continued on other segments of the pipeline, however, and water protectors in North Dakota have warned that the pause there is simply a delaying tactic being used to diffuse the resistance efforts.

Water protectors continue to call for supporters to organize solidarity actions to target the financial institutions that are financing the project, as well as the pipeline companies that are attempting build it, which includes the Michels Corporation, the primary contractor.

The construction costs of the pipeline are being financed by a $2.5 billion loan made through several banks. The primary lenders are Citigroup, TD Securities and Mizuho Bank. Solidarity protests have been held internationally at various branch locations of all three of these banks.

In Santa Cruz, more actions to oppose the pipeline have been planned.

On Sunday, September 18, community members will gather at the Town Clock at 1 pm for a "family friendly" rally to stop the Dakota Access Pipeline.

On Sunday, September 25 at 3 pm, Livity Rising and Santa Cruz Food Not Bombs will host an event at the downtown Post Office. An event announcement describes it as an action in solidarity with, "Sacred Stone Camp’s effort to stop the Dakota Access Pipeline and the call for Obama to free Native American political prisoner Leonard Peltier." 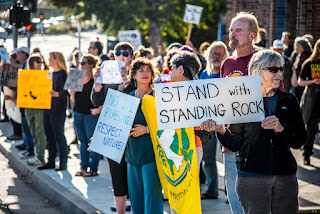 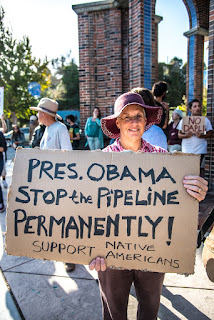 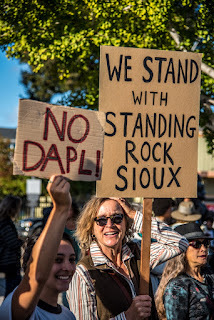 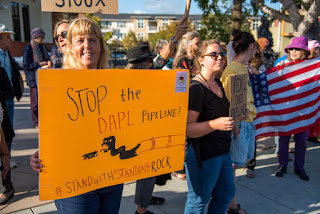 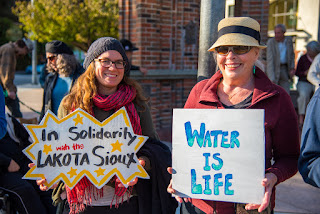 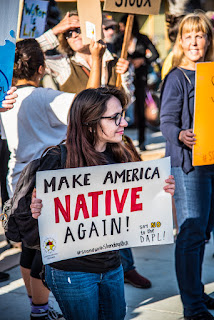 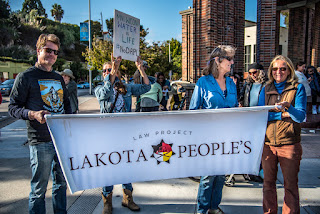 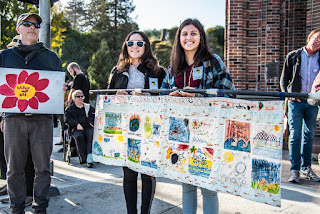 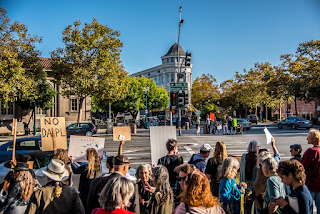 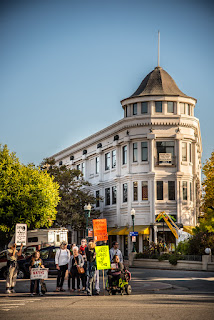 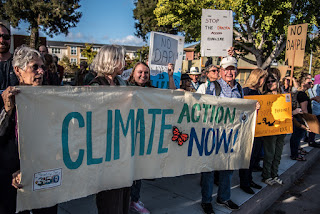 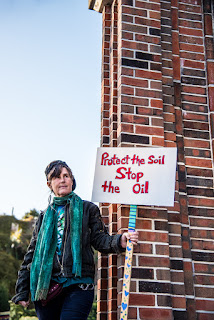 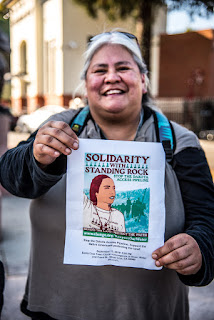 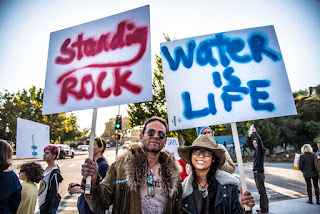 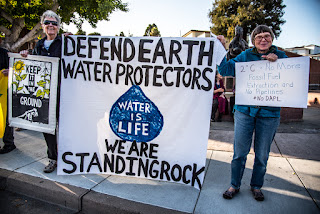 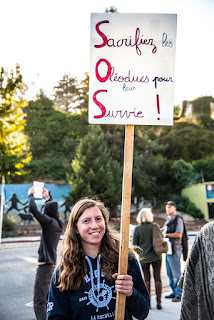 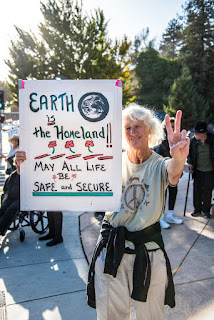 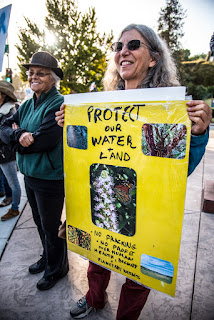 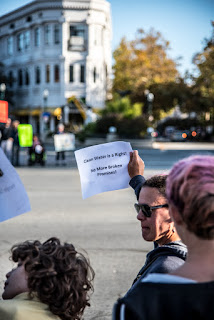 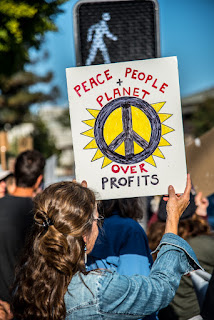 Posted by Alex Darocy at 5:51 PM No comments: