Two members of the Santa Cruz Eleven, in addition to several other community members and activists, had a brief opportunity to speak with Santa Cruz District Attorney Bob Lee when he parked his car at the court house near a homelessness issues event being held at San Lorenzo Park on July 17th. Becky Johnson and Robert Norse are among the eleven people known as the "Santa Cruz Eleven" who were charged with two felonies each in association with the Fall 2011 occupation of the vacant bank building located at 75 River Street. When they saw DA Bob Lee drive up, they immediately engaged him in conversation about the serious charges they feel they and others are wrongly facing.

Posted by Alex Darocy at 6:47 PM No comments:


La Playa Carmel Hotel & Bar has completed its $3.5 million dollar restoration, and former workers who were not rehired when the hotel changed ownership and the construction was completed were joined by community members for a "Rally to Rehire La Playa Hotel Workers" on July 6th. This is the first major protest at the hotel since the completion of the remodel, and the management has stated that it only rehired two of the 113 former La Playa employees. This, and the fact that that workers have struggled with hotel management since 2010, has prompted labor groups to call for a boycott of La Playa Carmel, which was announced at the rally, and organizers also requested a strong turnout from community members for a two-day "siege" of the hotel from 7am-7pm on July 20th and 21st. Approximately 150 community members and workers were joined by Monterey County Supervisor Jane Parker, Seaside Mayor Felix Bachofner, California State Assembly Member Bill Monning, and Monterey Bay Central Labor Council Director, Cesar Lara.

To read more, and to view photos and more videos, see: 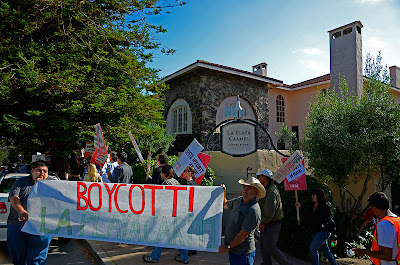 
Rick Walker digitally samples and "plays" brushes and other found object instruments. Walker is an experimental looping musician, and this performance is part of a set he played during a benefit for Desiree Foster of the Santa Cruz Eleven on July 1, 2012.

For more information about the benefit, see:

Right to Vote on Desalination in Santa Cruz


Paul Gratz recently declared in a press release that Santa Cruz is the, "First US city to vote on seawater desal." In this video, Gratz, and Jacquy Griffith speak at the Santa Cruz City Hall, just before community members turned in 2,003 petitions with the signatures of 8,717 Santa Cruz water citizens to the City Clerk in May. After the petitions are verified, citizens will have a chance to decide if construction of the proposed water desalination plant will proceed in Santa Cruz.


To view photos and read more about the rally, see:
Supporters of Right to Vote on Desal Turn in Petitions at Santa Cruz City Hall
http://www.indybay.org/newsitems/2012/05/29/18714351.php
Posted by Alex Darocy at 9:00 PM No comments:


A man named Lucky plays saxophone in front of the Rittenhouse building on a quiet night in downtown Santa Cruz.
Posted by Alex Darocy at 11:48 AM No comments: