More than 60 people gathered at Santa Cruz City Hall on August 18 for the latest in a series of community campouts organized to protest local laws that ban sleeping in public. It was the sixth held at City Hall since July, and was attended by approximately twice as many sleepers as the previous campouts.

Santa Cruz City Hall is closed to the public at night. To sleep in its courtyard is an act of civil disobedience being undertaken by protesters to, in part, pressure the city to open up its parks at night for homeless people to sleep in.

Another one of the demands of participants is the repeal of the sleeping/camping ban, which outlaws sleeping in public (with or without setting up bedding) in the City of Santa Cruz between the hours of 11pm and 8:30am, in addition to prohibiting sleeping in cars.

The sleepouts are attended by people with houses and people without houses of their own to live in. Some have raised tents on the City Hall lawn, but most use some form of sleeping pad and stay out in the open using sleeping bags or blankets. Many use cardboard as a sleeping pad.

Some have slept directly on the ground or the sidewalk with little or no bedding.

At the August 18 sleepout, a small cardboard sign that was visible on top of a person's sleeping gear simply read, "I made mistakes."

The Santa Cruz Police Department has attempted to clear City Hall of four of the five previous sleepouts by warning and/or citing those found in the courtyard after hours. After the police leave, however, participants go back to sleep and stay the night.

On the evening of August 18-19, thirteen officers arrived at 1:30am, and issued at least two citations to individuals for being in the City Hall courtyard after hours.

A large group of sleepers eventually returned to the courtyard to stay through the night, and volunteers brought breakfast for everyone shortly before 7am. 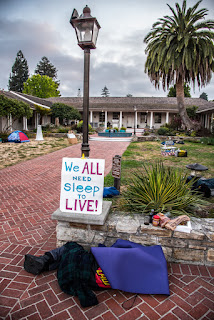 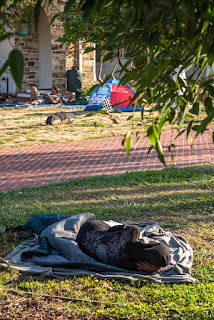 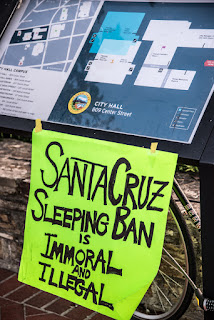 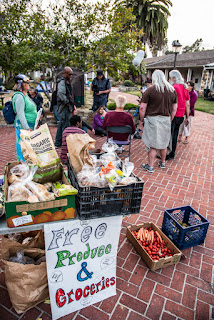 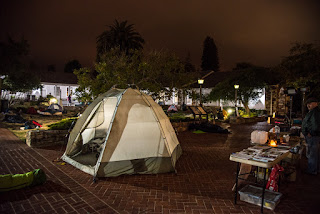 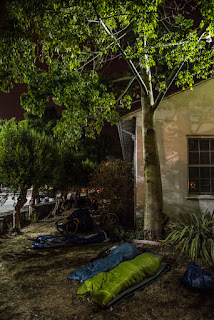 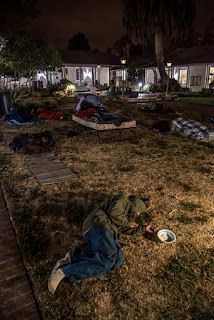 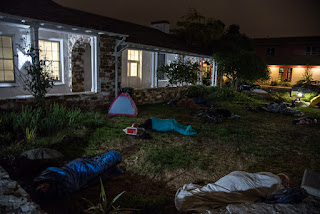 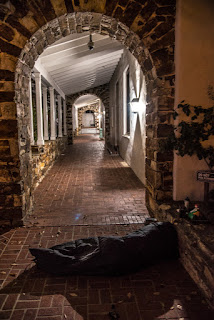 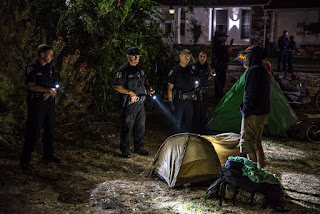 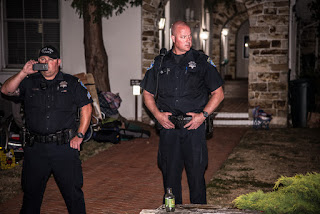 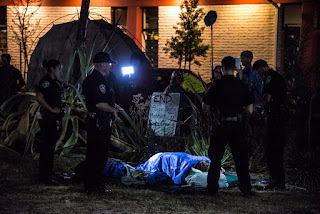 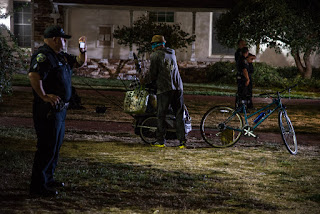 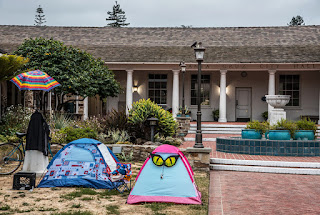 On August 11, community members in Santa Cruz held their fifth in a series of sleepouts organized at City Hall to protest local laws that make it illegal for homeless people to sleep in public. Police arrived at midnight and citations were issued to many in the group of demonstrators who were attempting to sleep in the courtyard as an act of civil disobedience. 24-hour stay away orders were issued to at least two of those present, and a journalist who has been documenting the whole series of protests was arrested and taken to jail. After police left, most of the protesters remained and slept on the sidewalk until the next morning. 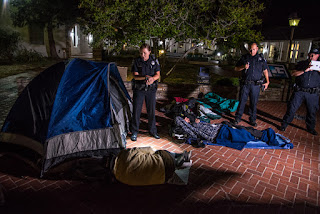 The courtyard area of Santa Cruz City Hall is closed to the public at night, which is one of the issues homeless rights demonstrators have been targeting. Their desire is to see city parks opened at night so that people without homes will have a place to go where they are not targeted by law enforcement.

Another focus of the protests has been the local Sleeping/Camping Ban, which prohibits sleeping in public (with or without setting up bedding) in the city between the hours of 11pm and 8:30am. The ordinance also criminalizes sleeping in cars.

The sleepout on August 11 may have been the first time the city's parks stay away ordinance has been used against political protesters and journalists.

Many of those participating in the campouts are now calling themselves, "Freedom Sleepers."

They first arrived at City Hall at 3pm. The weather was warm and some individuals took advantage of the solar shower booth organizers set-up in the courtyard. A duo played music in the courtyard through the campers' PA system as the city council meeting began inside. Adjacent to council chambers, snacks were provided on a Food Not Bombs table, which also displayed crates marked, "Free Produce & Groceries."

Later in the afternoon, the campers made their first appearance at a city council meeting. They have been holding the sleepouts at City Hall since July, but the council had been out of session for summer vacation.

During the public oral communications period, they each used their two-minute turn at the city council podium to read sections from a recent statement of interest filed by the U.S. Department of Justice (DOJ) in a legal case involving an ordinance which bans sleeping and camping in public places in Boise, Idaho.

Activists in Santa Cruz, as well as those opposing sleeping bans in other cities across the country, have applauded the DOJ's involvement in the case, and hope this will lead to the repeal of the ordinances.

The DOJ is taking the position that laws that criminalize homelessness violate the “Cruel and Unusual Punishments” Clause of the Eighth amendment of the U.S Constitution.

"Pursuant to that clause, the Supreme Court has held that laws that criminalize an individual’s status, rather than specific conduct, are unconstitutional," the statement of interest states.

The statement of interest also notes that under the Violent Crime Control and Law Enforcement Act of 1994, the federal government may enforce the rights of individuals to be free from, "unconstitutional and abusive policing."

The DOJ also mentioned in its conclusion that the lack of available space in homeless shelters should be a measure of whether camping ordinances can be enforced:

"For the reasons stated above, the Court should adopt the analysis in Jones to evaluate Boise’s anti-camping and disorderly conduct ordinances as applied to Plaintiffs in this case. If the Court finds that it is impossible for homeless individuals to secure shelter space on some nights because no beds are available, no shelter meets their disability needs, or they have exceeded the maximum stay limitations, then the Court should also find that enforcement of the ordinances under those circumstances criminalizes the status of being homeless and violates the Eighth Amendment to the Constitution."

The public was only allowed 30 minutes to speak, and some of the sleep activists were not given the chance to address the council. The meeting eventually adjourned at 10pm. Shortly after that the campers began to spread out in the courtyard and turn in for the night. Some of the protesters have houses of their own to go to, while others in the group are houseless and live on the street.

Police conducted a raid on the sleepout at around midnight.

When they arrived, one man was sleeping next to his wheelchair, which he parked on the walkway near the entrance to council chambers. He was cited, but he maintained his ground and slept in the same location until morning.

About ten officers with the Santa Cruz Police Department, lead by Sgt. Forbus, arrived during the raid. Forbus appeared to be video recording protesters with an Apple iPad device. Several sheriff's deputies responded as well, but not until after the courtyard had already been cleared by the SCPD.

During the raid, videographer Israel Dawson was abruptly arrested while in the act of recording and documenting the protest. As they handcuffed his wrists together from behind, police accused him of walking away from them when they were trying to get his name. He was booked into county jail on the charge of resisting arrest. His assistant, Lauren Benson, was holding a boom microphone that was wired to Dawson's video camera at the time of the arrest. She was issued a citation for being in the City Hall courtyard after hours, in addition to a 24-hour stay away order. Dawson and Benson have been documenting the series of sleepouts for Dawson's final project in the Social Documentation Master of Arts program at UC Santa Cruz.

Homeless rights advocate Robert Norse was also issued a 24-hour stay away order by police after he entered the courtyard area and walked along the main pathway to council chambers. He argued it was the public's right to use the pathway to access the city council agenda, but was issued a citation by police regardless.

The parks stay away ordinance was adopted by the city council in 2013 as a method of eliminating "problem" behavior in public parks. Under the ordinance, a park user can potentially be banned for 24 hours after receiving one citation of any type in a city park. Repeated citations can lead to a person being banned from a park for up to a year, and a violation of a stay away order can result in a misdemeanor arrest, which is punishable by jail time.

After the police finished the raid and left, several individuals did return to the courtyard area, but most in the group decided to sleep on the sidewalk in front of City Hall that evening, where they stayed until the morning. 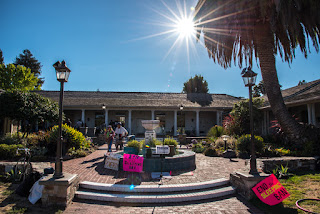 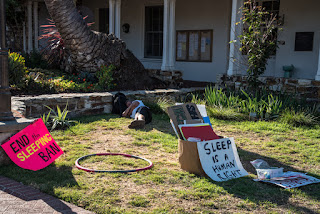 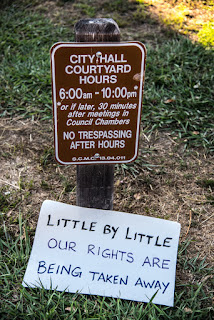 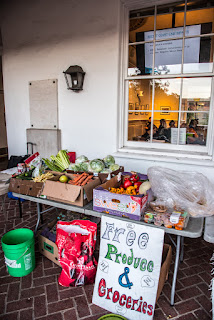 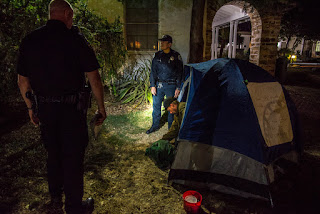 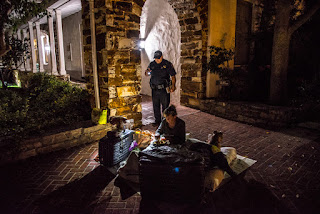 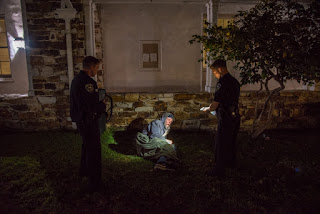 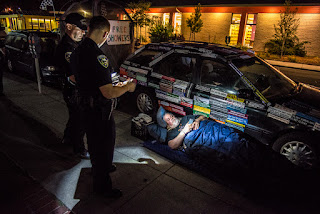 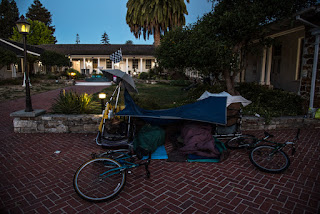 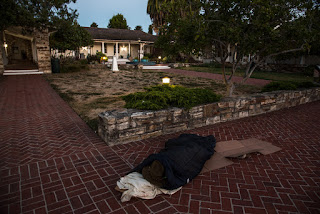 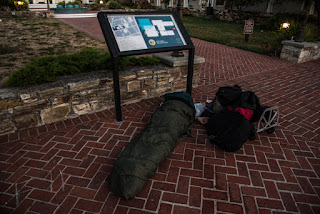 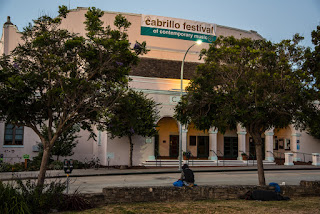 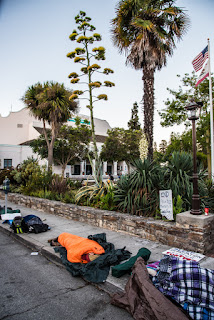 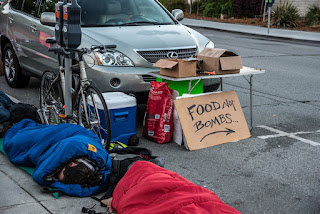