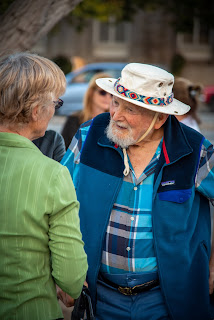 Sculptor E.A. Chase, creator of the Collateral Damage sculpture at the Santa Cruz Town Clock, passed away on February 29 at the age of 87. Here Chase speaks with Mathilde Rand at the Town Clock on August 2, 2015 at a rally to commemorate the 70th anniversary of the dropping of nuclear bombs on Hiroshima and Nagasaki. The Collateral Damage statue is dedicated to all victims of war. It was installed at the Town Clock in August of 1995 to commemorate the 50th anniversary of the Hiroshima and Nagasaki bombings. Mathilde Rand produced a video documenting the dedication of the statue in 1995. The event was attended by 12,000 people at the Town Clock and at a rally in San Lorenzo Park.

To read more about the rally at which this photo of E.A. Chase was taken, see: 70th Anniversary of Hiroshima and Nagasaki Bombings Commemorated in Santa Cruz

Posted by Alex Darocy at 5:21 PM No comments: