On June 14, the Freedom Sleepers held their 49th community sleepout at Santa Cruz City Hall, with about two dozen people spending the night. As summer approaches, attendance has continued to increase at the weekly sleepouts, which are organized to protest local laws that criminalize homelessness. The 50th community sleepout is planned for Tuesday, June 21, and the Freedom Sleepers have announced their one-year anniversary sleepout will be held on July 5.

Through the course of the protests, participants have rallied around one primary demand: the repeal of the city's camping ban, which outlaws sleeping in public, with or without bedding, between the hours of 11pm and 8:30am. By spending the night and sleeping at City Hall, participants directly violate the camping ban.

Organizers of the one-year anniversary sleepout say they are planning to announce a list of demands. The anniversary event will also feature a speak out and a memorial for houseless individuals who died this year.

Additionally, the sleepouts continue to be a hub for autonomous organizing around homeless rights issues in Santa Cruz. Following the circulation of a petition in support of opening City Hall's public restroom as a 24 hour facility, activists took a unique approach and appealed directly to Santa Cruz City Council member Pamela Comstock for support.

On June 4, the family of Yanira Serrano was joined in the city of Half Moon Bay by a large community of friends and supporters to commemorate the two year mark since the 18-year-old was killed by San Mateo County Sheriff's deputy Menh Trieu. Also in attendance were the loved ones of two other victims killed by police in the Bay Area, Errol Chang and Antonio Guzman Lopez. 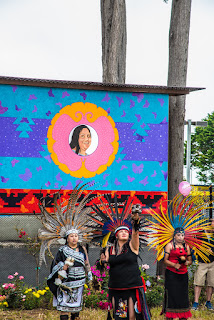 Yanira's brother, Tony Serrano Garcia, wrote in an event announcement that the community remembrance of Yanira would also focus on justice.

"Everyone is invited to celebrate the life of my sister in commemoration of her second angelversary, in which not only will [we] celebrate her spirit and the beauty of who she was, but we will also let the county and corrupt system know that we are still hungry for justice. Yanira is in the heart of each and every one who still remembers her," he wrote.

The gathering began at the large, colorful mural created in Yanira's honor, which is located on the property of her church, Our Lady of the Pillar Catholic Church in Half Moon Bay.

Individuals formed a circle around the "Mariposa Mural," as it is also referred to because of the multitude of butterflies that adorn it.

Yanira was known to have loved butterflies.

Church leaders from several different faiths shared words of comfort and led the group in prayer. The mural's artist Ernesto Olmos, who is also a musician, joined Aztec Dancers in ceremony.

From the church, Yanira's parents Carmen Garcia and Ignacio Serrano, joined Tony to lead a march downtown, Along the way, activist Lisa Ganser wrote on the street with chalk the names of other individuals who were also killed by the police in the Bay Area. Several children joined in helping to create the chalk art.

The group gathered at Mac Dutra Plaza, which is located across the street from Half Moon Bay City Hall. An altar to Yanira was displayed on the plaza's stage. After speakers were heard, the hip-hop group MoonRaised performed.

Many individuals held pink balloons to celebrate Yanira's favorite color. Towards the conclusion of the remembrance, the group released the balloons together.

"We will always remember my sister like a strong woman," Tony Serrano Garcia said while addressing supporters at the plaza. As he struggled to continue speaking, Carmen, who had not intended to speak during the remembrance, came to her son's aid on the plaza's stage.

As she briefly spoke about the horror of losing her daughter to the police, a butterfly appeared out of nowhere, fluttering energetically. It flew right over them and across the stage. Tony was visibly moved and pointed out the butterfly to Carmen. It was as if they were sharing a moment, however brief, with Yanira herself.


Yanira was killed outside of her Half Moon Bay home at the Moonridge community on June 3, 2014. On the evening she was killed, she had been experiencing mental health issues. Her family was attempting to get her to take schizophrenia medication that had been prescribed to her. They called 911, as they had done in the past, for medical help, after Yanira began to yell at them. Tony, who made the call, stated clearly that the situation was not an "emergency". The family was able to calm Yanira, and was able to get her to take her medication. They then gave her fruit to eat and a knife so that Yanira could cut it.

Instead of medical help, sheriff's deputies were dispatched.

Yanira's family witnessed the killing and attempted to approach Yanira but were prevented from doing so by deputy Trieu.

The Sheriff's Office and the district attorney Steve Wagstaffe determined the killing was justified because Trieu felt threatened by the paring knife Yanira was holding at the time.

In September of 2014, the family filed an excessive use of force lawsuit against deputy Trieu, San Mateo County, and the Sheriff's office, claiming Trieu had escalated the situation when he chose to rapidly approach Yanira, which caused her to move towards him.

The lawsuit claimed that Yanira was no meaningful threat to Deputy Trieu because she was only 5'2" and weighed 200 pounds. Her mobility was affected by a weight gain she was experiencing that was the result of side effects from one of the medications that had been prescribed to her. Her mobility was further affected by a congenital birth defect. Essentially Yanira had a club foot.

In preparing the lawsuit, it was discovered that deputy Trieu had not been provided Crisis Intervention Training (CIT) before he was assigned for patrol, which is mandated by the San Mateo County Sheriff's office.

The lawsuit was dismissed by a federal judge earlier this year.

At the community remembrance for Yanira, Matt Chang and Laurie Valdez spoke about the trauma of losing a loved one to police violence.

"My brother Errol was also murdered by the police," said Matt Chang.

Errol Chang was killed less than three months before Yanira on March 18, 2014 by officers with the Pacifica Police and the Daly City SWAT Team. Errol was suffering from a schizophrenic episode at the time, and was killed moments after he attempted to surrender.

"There's an epidemic that is happening in this country," Chang said. "More than half of the people police kill nation-wide, annually, are people with mental illness."

"The families that need help the most, that have a loved one that's having a mental health crisis, they can't be afraid to call 911 for help," he said. "This is not a solitary case, this is happening everywhere. It's important to know that."

Laurie Valdez described how difficult it has been for her family since her partner, Antonio Guzman Lopez, was killed by police. Lopez is survived by his 4-year-old son Josiah, who he had with Valdez, and his step-daughter, Angelique. Both were in attendance at the remembrance for Yanira.

"For the families here, I can't even describe it. It hurts. Nobody knows what we feel," she said.

On Feb 21, 2014, Lopez was shot in the back twice and killed by two officers with San Jose State University Police (UPD). Lopez was walking through the university's campus on his way home from work when they killed him. He was deemed a threat by police because he was carrying a work tool.

Tony Serrano and Laurie Valdez first met at a rally organized in San Francisco seeking justice for Alex Nieto, who was killed by officers with the SFPD in March of 2014.

They became fast-friends, and Tony has also become very close to Josiah, taking him to movies and spending time with the young one, who will now have to navigate the rest of his life without a father.

"It's a great bond that has come out of a very tragic situation for both of our families," Valdez said.

"We want justice and we're trying to figure out how to get it. We don't know how, we're just doing what we think we have to make our voices heard, because it's not right, and we don't need another family to go through this," she said. 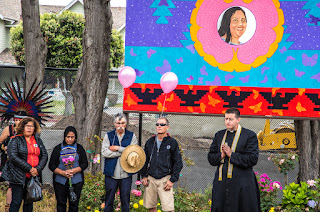 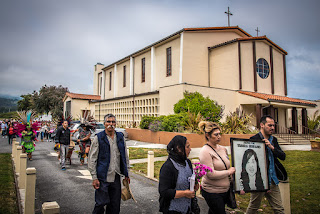 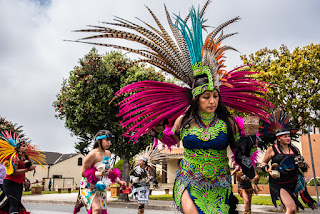 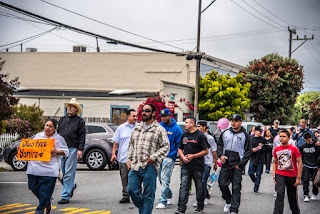 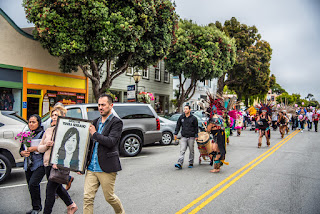 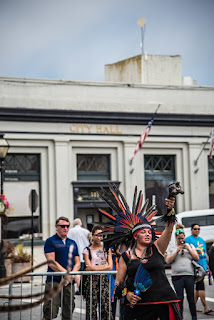 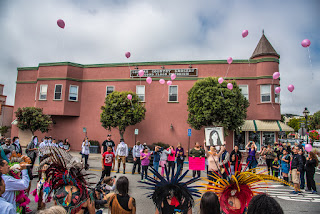 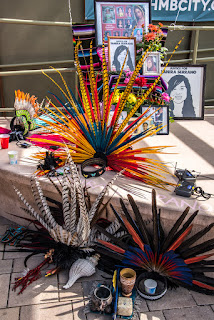 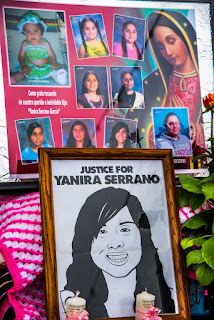 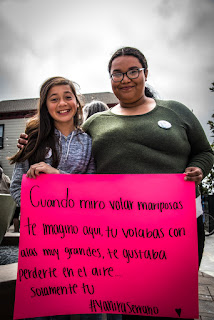 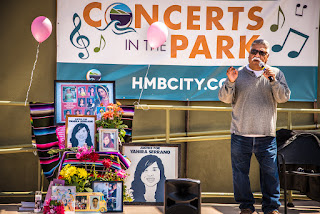 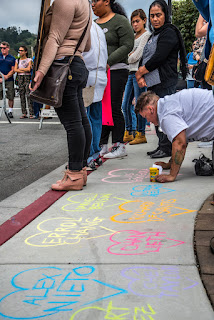 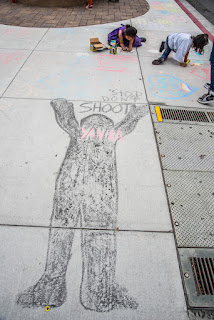 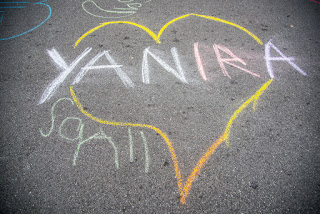 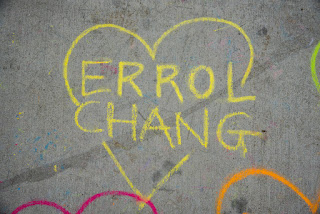 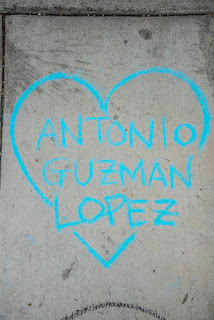 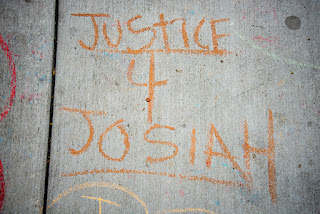 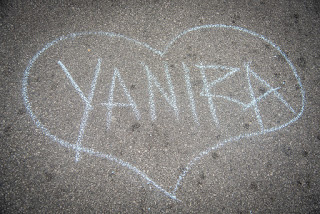 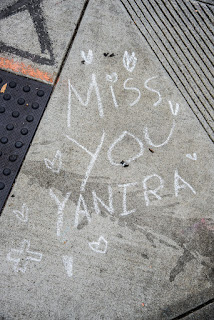 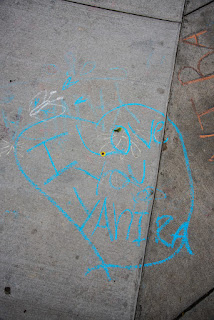 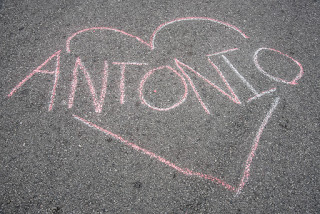 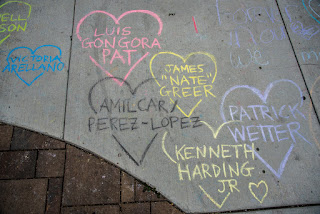 Posted by Alex Darocy at 2:34 PM No comments: