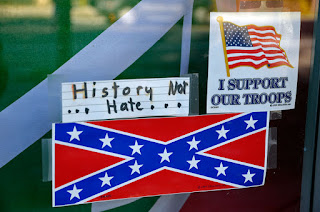 A Thanksgiving trip to The Witch's Cottage, an antique shop located in Felton, revealed what has been a slow moving topic of discussion as of late in the small town located in the redwoods of the Santa Cruz Mountains: the shop is currently displaying two Confederate flags in its front windows, along with a hand written statement taped nearby that reads: "History...Not Hate.

One is what appears to be a full sized replica-version of a Confederate battle flag, and the other is a smaller sticker labeled as being produced in 1999 by Eagle Emblems Inc., which sells a variety of military-style, "emblematic" products. 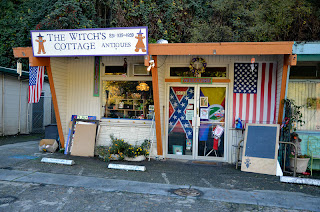 The shop is located along Highway 9, and in addition to the Confederate flags, two American flags also hang, and visible are stickers with statements supporting the American troops, and a sticker denoting membership in the San Lorenzo Valley Chamber of Commerce. 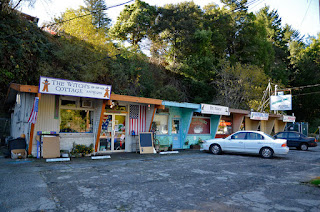 The main shop window is full of what look to be 1970s and 1980s era pop culture curios.

It's uncertain what the "local" reaction will be to the Confederate flags, or if there has been any attempts by the public to communicate with the owner about them. The Witch's Cottage is located in a small and somewhat isolated shopping strip along a state highway that sees very little foot or bicycle traffic.

For comparison, in 2009 a Nazi flag was displayed from an apartment window above Pacific Avenue in a busy location of downtown Santa Cruz, and the resulting protests received coverage by a variety of commercial media outlets. Rapidly, community members who were offended and wanted the flag to be removed began a letter writing campaign aimed at the apartment's owner and management, who then created a rule banning the public display of hate symbols by tenants. The flag was removed shortly after that.

The small towns located along Highway 9 in the San Lorenzo Valley have, like most areas in Santa Cruz County, experienced a regular pattern of racially motivated crime and other incidents over the years.

In 2005, several reported incidents of violence against people of color motivated the community of Boulder Creek to combat it in a variety of ways, including holding a candlelight vigil to make a public statement against racism.

In 2008, the San Lorenzo Valley based organization "For the People" operated in violence intervention and youth development, working with "gang-affiliated" youth. It was mentioned specifically on their website that included those in "white power" gangs.

The National Association for the Advancement of Colored People (NAACP) describes the Confederate flag as a, "state sponsored symbol of white supremacy," and many of that organization's actions include working for the removal of the Confederate flag from governmental and public displays across the country.

The Confederate flags that hang at The Witch's Cottage are of the battle flag variety, and when the Texas NAACP was working to have the Confederate flag removed from license plates in that state, they stated in a press release that, "any objective person should understand that the Confederate Battle Flag represents repression and is a badge of slavery. Besides that, we all know that the Confederacy had an official flag and the Battle Flag was not one that was adopted by the Confederacy nor did it ever fly over Texas. It was adopted by hate groups as a means of expressing anti-Black sentiments and the rest is history. If there was a desire simply to honor one’s ancestors it for certain would not be by using this particular flag."

The Texas NAACP didn't mince words with their arguments, and the organization went on to state that the display of the Confederate flag would lead to the "psychological harm" of African Americans, and that it is a symbol of "discrimination, disrespect and hatred." 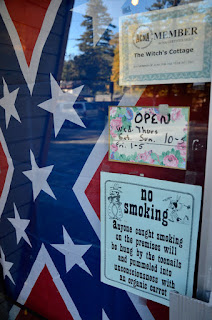 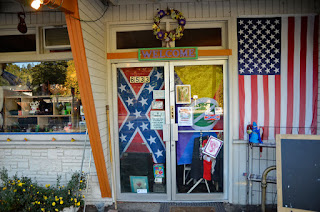 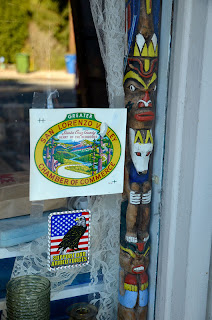 
A recent trip to downtown Santa Cruz revealed how difficult it can be for street musicians to navigate the many different city ordinances that affect them, some of them unfairly. The downtown is patrolled by officers from the Santa Cruz Police Department, both on foot and in vehicles, and also by private security forces which include uniformed guards employed by First Alarm. The Downtown (business) Association's own representatives, who are called "hospitality guides" dress in bright yellow and also enforce city ordinances by threatening to call the police if individuals do not comply with their demands.

On the Friday evening of November 9, a group of four musicians who were playing in front of the New Leaf Market, located on the corner of Pacific Avenue and Soquel Avenue, were told by two Downtown Hospitality guides to stop playing because the crowd listening to them had become too large. The band did not argue and they moved across Soquel Avenue to resume playing in front of the new Forever 21 store.
Taking the band's place in front of New Leaf was a single woman who sang and played an acoustic guitar. Shortly after she began to play, she was told by a hospitality guide that she was violating the city's noise ordinance and that she would have to stop what she was doing.
The young woman was told that she would have to stop playing was because the complaint came from someone, "trying to conduct business."
"I'm trying to conduct business," she emphatically stated when interviewed.
"This is the third time [in one day] I have been stopped," she said, sadly.
When asked if she thought she was playing louder than the four person band who were previously there, and still playing across the street, she said, "I think they were much louder."
"I have a lot of energy, always, and sometimes that energy is too much for people," she explained.
She said she was downtown in Santa Cruz trying to earn money to eat and to buy her friend a new pair of shoes. When she arrived at the spot in front of New Leaf she said found a box with some slices of french bread in it, explaining she was happy to have found it as she chewed on a piece.
As she continued to talk about her encounter with the hospitality guide, a woman walked by and consoled her affectionately: "I love you and all of your beautiful singing," she cooed.
It's unclear if the young woman with the guitar ever moved from that spot in front of New Leaf after she was warned, and a few minutes later, the hospitality guide returned and was telling her she had received another noise complaint.
She asked the guide, "I am a tiny little girl and was I louder than a four person band?"
The guide's response: "I don't do that, I am complaint driven. If someone calls me and complains, I have to address the issue....plus, I am going to go pick on them right now."
Before leaving, the guide told her about other spots she could play at, including the spot in front of Bookshop Santa Cruz farther down on Pacific where there are less restrictions. She also suggested the young woman play during First Friday. To what extent that information was helpful is uncertain, as the woman needed money for food, and shoes for her friend, and First Friday was more that three weeks away.
The fairness and impartiality of the code enforcement being conducted by the hospitality guides has been called into question by community members over the course of the program's tenure downtown. The program is privately operated and lacks the same transparency, however modest and in need of expansion, which public enforcement agencies themselves are subjected to.
At one point during the street musicians' security encounters that evening, Sergeant Bush of the Santa Cruz Police Department walked by. He passed by individuals sitting on the sidewalk, apparently choosing not to hold them to task for violating the city's sit-lie ordinance which prohibits the act of sitting in most places along Pacific Avenue.
The hospitality guide, however, did not let the sidewalk sitters stay seated when she saw them. Even though they take up less space and protrude less than the individual who was also there enjoying the music with a baby in its stroller, the guide made them get up.

The downtown hospitality guide interacted with the musicians a number of times, as can be seen on the video:
0:00 Woman with guitar in front of New Leaf Market told to move because she has received a noise complaint.
2:20 Four person band plays in front of Forever 21.
2:51 Hospitality guide tells band members not to sit on the planter boxes, that they have to be at least 14 feet from the "Imagine Positive Change" meters, and that they need to "relocate."
3:21 Woman receives another noise complaint in front of New Leaf.
5:59 Hospitality guide reminds band that they have to be "seven squares out" and that they have to relocate every hour.
7:00 Sergeant Bush of the SCPD walks by an instrument case that is not "seven squares out" and also individuals sitting on the sidewalk. The Sergeant walks by without stopping.
7:18 The hospitality guide tells two audience members they may not sit on the sidewalk, and tells a band member not to sit on the planter again.
7:36 The woman asks the guide again why she was singled out for a noise complaint.
7:50 The band engages in some lite civil disobedience.
8:05 The guide tells band they have to leave. 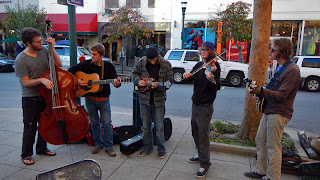 On October 30, the family of Derrick Gaines, the 15 year old who was shot and killed by a South San Francisco Police Department officer on June 5, filed a federal civil rights action against the City of South San Francisco. Family members, who are seeking $10 million in damages, hired Attorney John Burris to represent them in the wrongful death action. Burris says, "This is a clear case of racial profiling that lead to disastrous results." The press conference was held in front of the South San Francisco Arco gas station where Gaines was killed, and Rachel Guido Red, Gaines' mother, said she hopes the civil action will lead to a change in police procedures. "These are our kids out there and there's other ways of dealing with them, other than shooting and killing them," she said.