On November 25, a wide variety of community members in Santa Cruz came together at the Town Clock, and eventually marched to the Santa Cruz Police Department, in response to the announcement in Missouri the day before that the grand jury investigating the killing of Michael Brown had concluded there was "no probable cause" for an arrest or indictment of Ferguson police officer Darren Wilson. Wilson shot and killed Brown on August 9 in Ferguson, MO. in broad daylight. Numerous witnesses reported Brown was unarmed and holding his hands up while attempting to surrender to Wilson.

At the Santa Cruz Town Clock, individuals passed out flowers and candles, and a rally with speakers was held. It was announced that afterward the Resource Center for Nonviolence (RCNV) would be open and hosting a community dialog to discuss the grand jury's decision.

After the speeches at the rally concluded, some participating in the event organized a march down Pacific Avenue, which eventually made its way to the Santa Cruz Police Department. From there the group marched to the RCNV, chanting along the way, "Hands up, Don't shoot!"

Other chants during the march included, "Hey hey, ho ho, racist cops have got to go," "No justice, no peace. Fuck the police," "No more pigs in our community. Don't shoot," and, "We want justice." 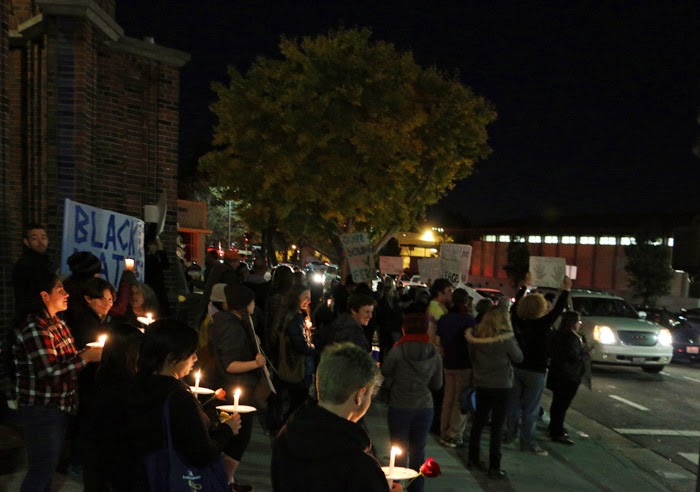 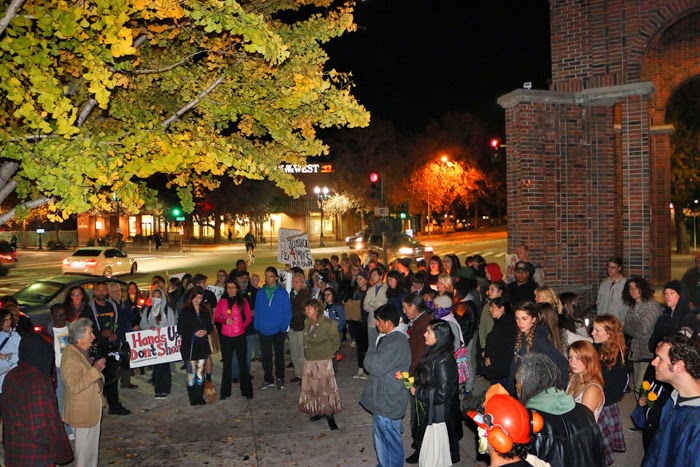 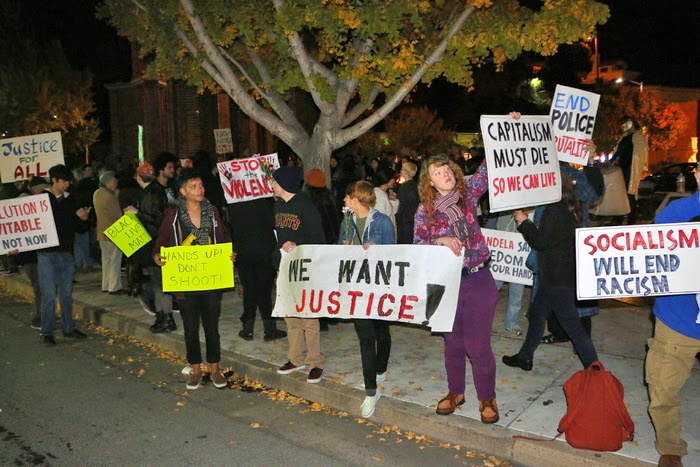 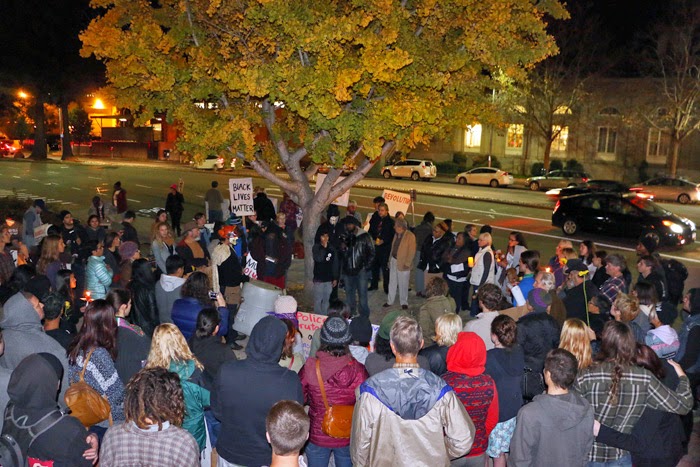 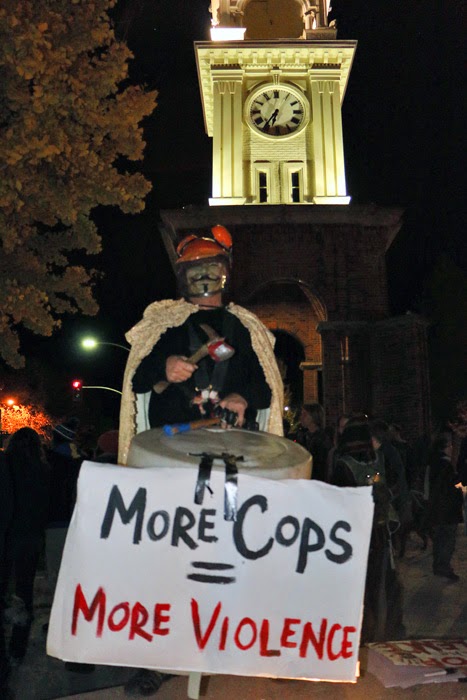 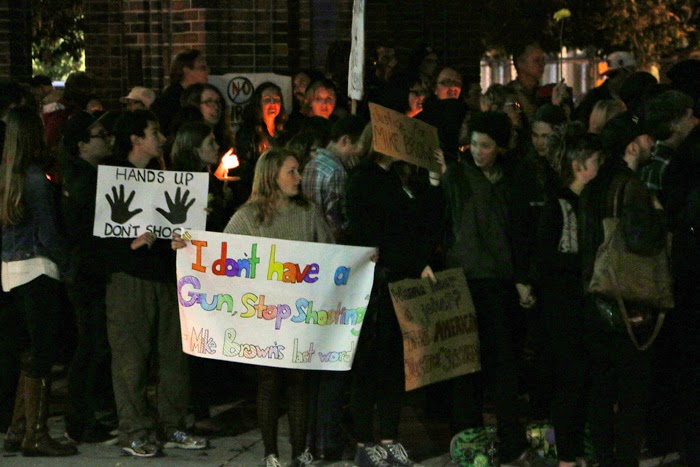 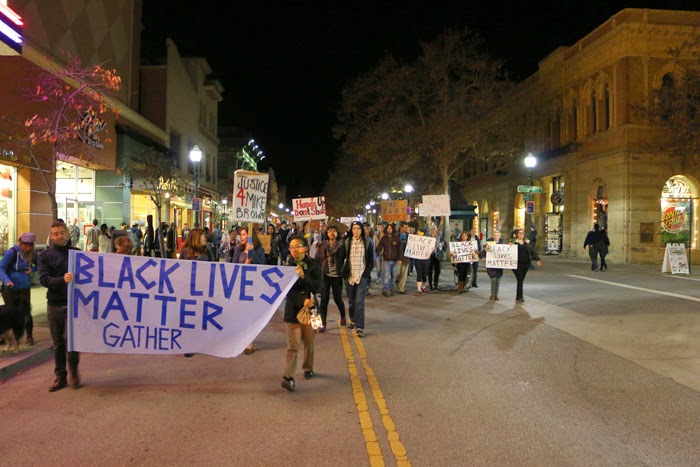 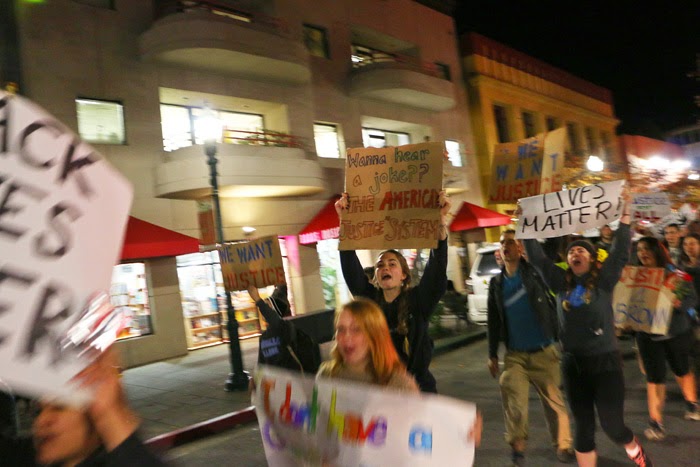 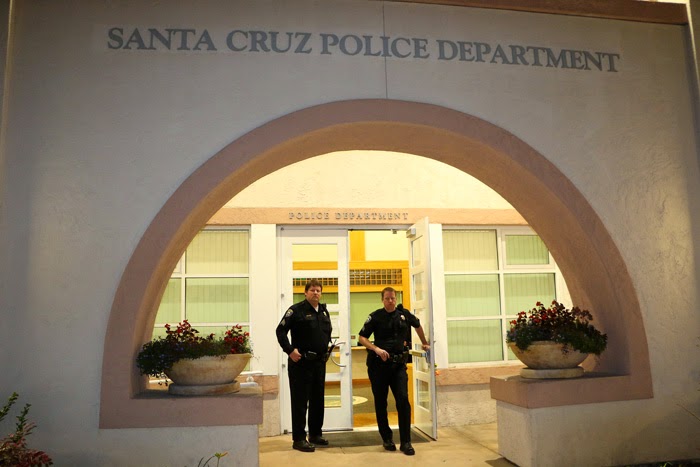 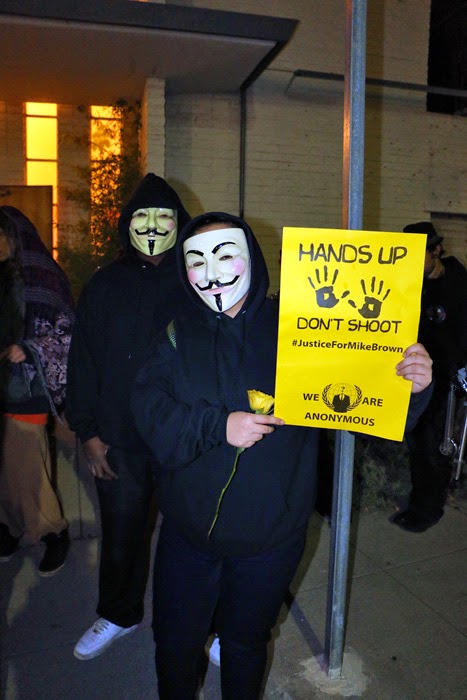 Posted by Alex Darocy at 6:21 PM No comments:

In Mexico and Central America, a tianguis is traditionally thought of as an open air market where merchandise is sold. The word tianguis is derived from the Aztec language, and the cultural tradition has been practiced by Indigenous peoples since before colonial contact. To create a space where community organizing skills can be shared, the concept of a "community action" tianguis was created by individuals in the Mayfair community of San José. The first such Community Action Tianguis was held at Lee Mathson Middle School (MIT) on November 15, and featured participation from a wide range of organizations working in the areas of health, education, labor, food safety, immigration, and legal defense.


Visually, the Community Action Tianguis held at MIT resembled a traditional tianguis, however no merchandise was sold. Instead, individuals representing community organizations spoke, tabled and shared information, and a variety of goods and services were available at no cost. Hair stylists offered young people free haircuts. Community members cooked hot dogs which were distributed for free, and fresh produce was given out by Good. To Go., which displayed a box full of huge, organic pomegranates in front of a neatly arranged produce cart.

Good. To Go., which is a project of the Health Trust, brings affordable, fresh produce and other healthy foods to locations where finding decent food may be difficult for local residents. The organization works with businesses, such as convenience and liquor stores, to help them improve the types of food they are able offer their customers. Additionally, Good. To Go. is working on amending the municipal code in San José to allow vegetable stands and street vendors greater flexibility as to where they may operate legally.

Education was the focus of many at the tianguis.

Somos Mayfair, one of the organizations that sponsored the Community Action Tianguis, found that 90% of parents surveyed believe they can contribute to their school and community. Empuje, which is the Parents Organizing Committee of Somos Mayfair, hosted a table at the Community Action Tianguis and communicated with the public about how difficult it can be for parents to participate in their children's education.

One parent involved with Empuje, who has a child in the Alum Rock School District, described the committee's efforts to bring translators into their district to help non-English speaking parents communicate better with teachers. Presently, parents at the school her child attends are volunteering as translators and doing the work themselves for two and a half days per week. They can't meet the demand for that service, however, and they hope in the future to be able to convince administrators to hire translators at every school in their district, on a full time basis.

Organizers of the Community Action Tianquis also hoped the event would help kickstart the process of opening up more of MIT's resources to the public. There is a large, well-maintained sports field located at Lee Mathson Middle School that is off-limits to the public. The field sits unused outside of normal school hours.

On November 15, the field was used for a soccer league exhibition game during the Community Action Tianguis. Organizers explained that opening the use of this field to the public could help reduce the cost for youth to play soccer locally which costs families $125 per child at the nearest field used for that purpose.

The Community Action Tianguis was organized by individuals from Mathson Institute of Technology, Mexican American Studies SJSU, Uni-Tierra Califas, and Somos Mayfair, and community members hope to host more in the future. 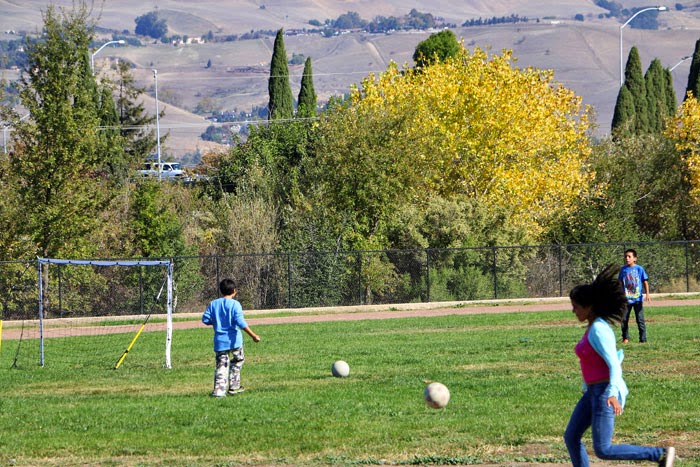 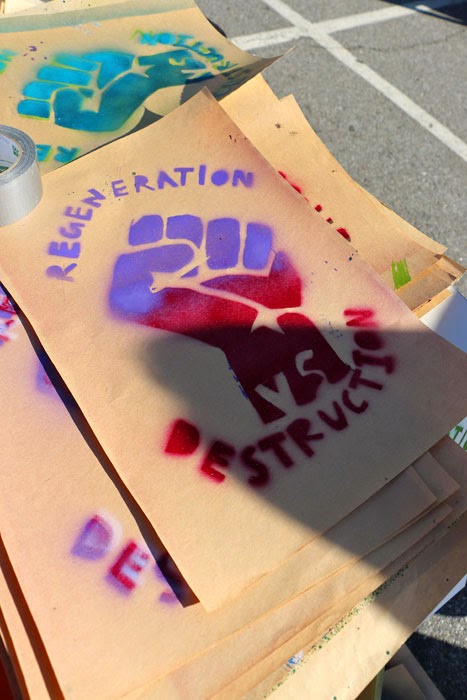 Posted by Alex Darocy at 6:03 PM No comments:

Dr. Cornel West spoke at the student occupation of the Humanities and Social Sciences building at the University of California Santa Cruz on November 20. Students occupied the building earlier in the day and plan to stay inside until the UC Regents roll back the tuition increases they approved this week. Student fees across the University of California system will raise by at least 5% a year for the next five years if the plan is instituted.
Posted by Alex Darocy at 11:57 PM No comments:

On November 20, students at UC Santa Cruz began an occupation of the Humanities and Social Sciences building. Hundreds of students participated in the march to the building, and an announcement was made that they plan to occupy it until tuition is rolled back. The UC Regents voted this week to approve a tuition increase plan that will raise student fees across the University of California system by at least 5% a year for the next five years.

Students first gathered at Quarry Plaza for a short rally in the rain. After the rally, the group marched through Classroom Unit 2, and around campus briefly, until they arrived at the Humanities building. After another short rally, they made their way to the top floor, asked administrators to leave, and began the occupation.

The UCSC students are in Solidarity with students at UC Berkeley who are currently occupying Wheeler Hall on that campus and have vowed to stay there until the Regents reverse their decision to increase tuition. 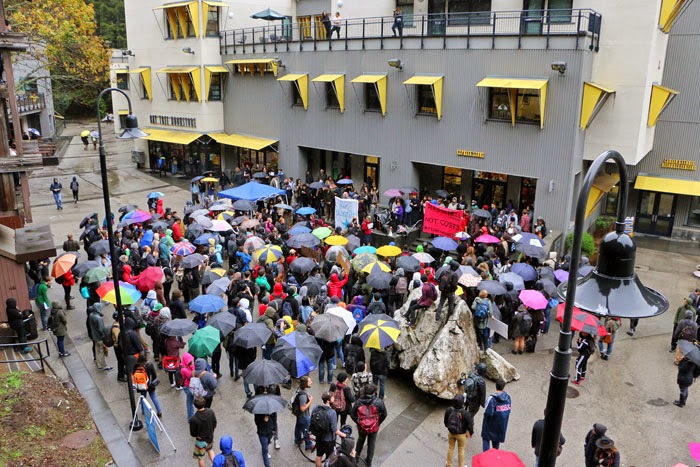 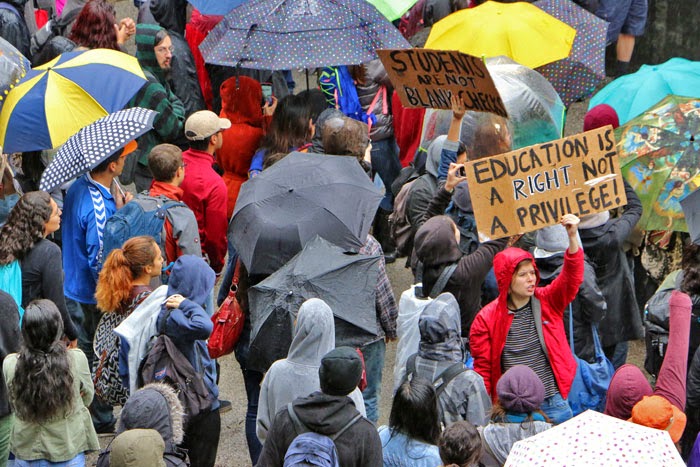 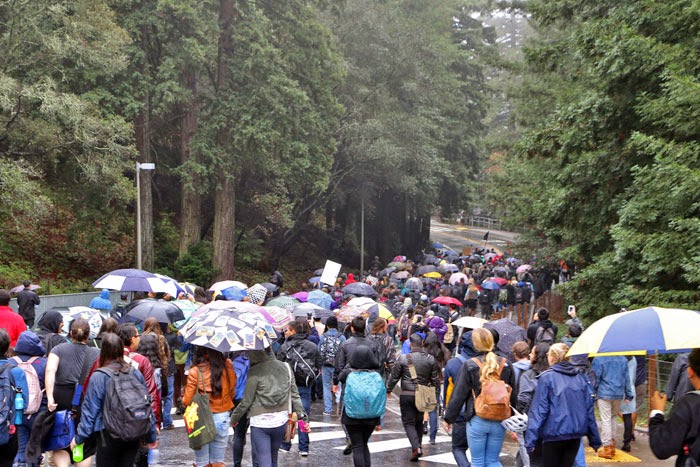 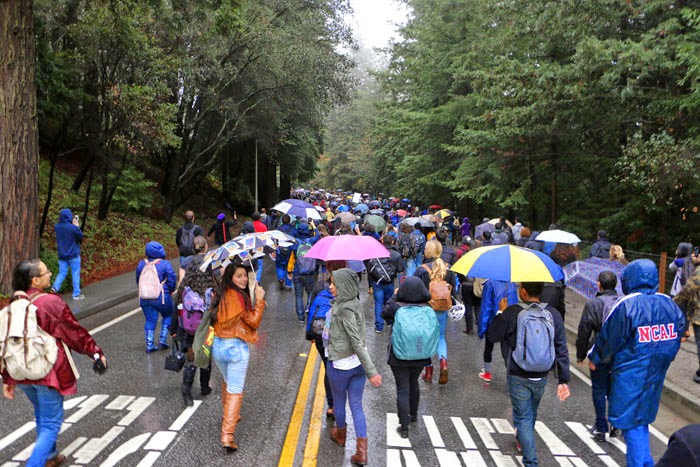 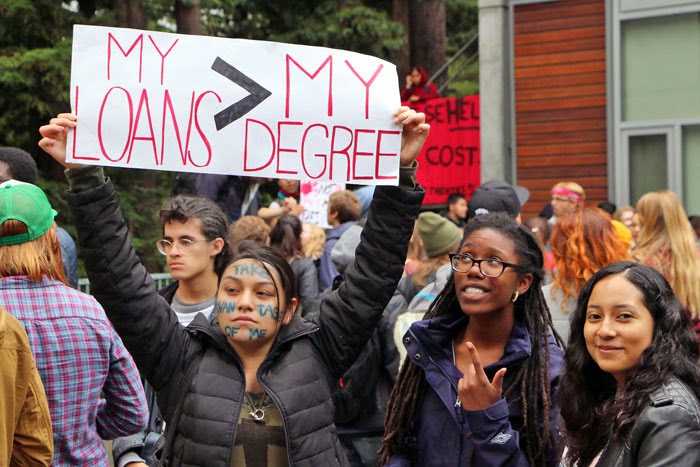 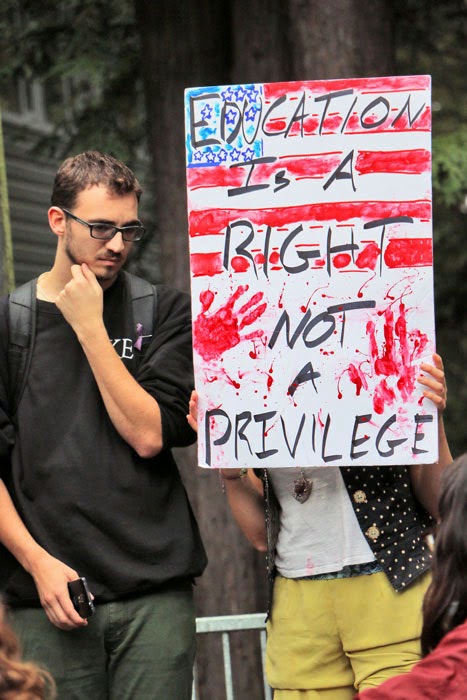