Scott Olsen (with the neck brace) laughs during the march to the Oakland port for the West Coast Port Shutdown when the march chant changes from, "Whose Port?" to "Whose Police?" Olsen helped carry the front banner in this march, which traveled from Oscar Grant Plaza to the port.
Posted by Alex Darocy at 10:54 PM No comments:

The Brass Liberation Orchestra plays during the march to the port in Oakland for the West Coast Port Shutdown on December 12, 2011.
Posted by Alex Darocy at 10:50 PM No comments: 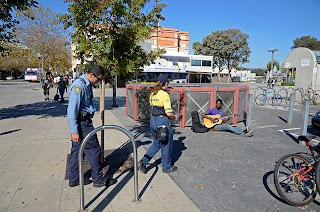 The man in the first photo was playing guitar while sitting against the bike lockers located adjacent to the metro center on Pacific Avenue in downtown Santa Cruz. When the guide (who was walking with a First Alarm security guard) approached the man she said to him, “you can’t be sitting and playing here.” The man immediately stopped playing, stood up, and moved.

In the second photo (which was taken 20 minutes after the first photo), the same hospitality guide encountered a teenage man sitting on the railing of a planter located across Pacific Avenue from the Old Theatre building, and told him, “don’t sit on the railing.” A detail from that photo shows an older woman leaning against the rail. The guide did not approach or speak to her.

From the Hospitality Program web page:

The Hospitality Guide Program’s (HGP) mission is to assist in promoting a clean, safe, and friendly atmosphere for shoppers, residents, employees and visitors. This mission is accomplished in the following ways:
Providing information and directions to shoppers, visitors and residents alike.
Providing a visible presence in the Downtown area and assisting in maintaining compliance with municipal codes by using educational outreach.

The faces of the subjects of these images have been blurred.

This report does not assert that either the downtown guide or the individuals spoken to were in violation of the law in any way. 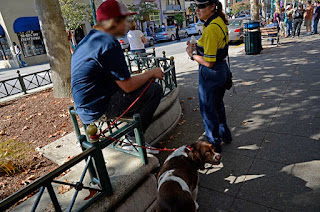 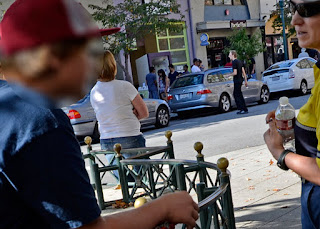 I originally published these photos on Indybay on November 1, 2011.
Posted by Alex Darocy at 10:45 PM No comments: