Santa Cruz Takes it to the Streets for Mike Brown

On November 24, the evening of the St. Louis County Grand Jury's announcement that they would not be recommending the indictment of police officer Darren Wilson for the killing of Michael Brown, a march and rally was held in Santa Cruz in solidarity with the people of Ferguson. On November 25, a second march and demonstration was held in Santa Cruz, and activists have also been considering the possibility of beginning an occupation locally in solidarity with the people of Ferguson. A meeting is planned for December 10 where they will publicly discuss their options.


Witnesses of the August 9 killing report that Michael Brown, an 18-year-old black man, was unarmed and attempting, with his hands up, to surrender to Wilson. Activists across the world planned demonstrations to coincide with the Grand Jury's decision about the case, regardless of the outcome. An announcement for the November 24 march in Santa Cruz read: "Whether or not murderer/police officer Darren Wilson is indicted for the killing of Mike Brown, we'll be in the streets!"

The march began at a housing co-op in downtown Santa Cruz a few hours after the Grand Jury's announcement. It grew as it made its way down Pacific Avenue. Many of those participating were in what appeared to be a state of shock, while others were vocally angry. Many cried at different points in the evening.

Those who self-identified as being black spoke first at the rally, which was held at the Town Clock.

"I usually have a lot to say, but all I am going to say is that even thugs don't deserve to be shot in the streets," said one of the first people to speak. "The constant separation that we perpetuate against each other sometimes is only a facade, it's not real. All black lives matter, all brown lives matter."

One individual who spoke described how interacting with people at the protest differed from his day-to-day experiences as a black person walking around in downtown Santa Cruz.

"I live downtown, so I take a lot of walks, and I see the eyes and the gaze of so many people on the streets. I could tell a million anecdotes," he said.

"I see all of your faces tonight, and all of your eyes, and they are looking right at me while I am talking, and I just feel such a deep sense of connection, and just hope that there can be change when we all gather like this; when we all look at each other right in the eyes and don't avert our gazes. I'm really moved at the moment," he said.

"I want to talk about being a black woman in America," said a member of the Central Coast chapter of AF3IRM, which is a transnational feminist organization of women.

"I'm tired of being hyper-sexualized by the media. I'm tired of feeling violated when I am walking down the streets. I'm tired of black mothers being labeled as welfare queens, and that their children don't matter, because they do. I'm tired of the violence against women," she said.

One of the organizers of the rally spoke about the need for unity among all of those fighting against police violence and state oppression.

"I'm going to be honest," the organizer said. "Being black is not easy."

"There are many different kinds of black. There are many different flavors to black, and sometimes we all don't get along. I will say it has been hard for me personally to live in America as someone who is black in certain spaces and not black in other spaces, but I think it is more important that we unite over our differences, rather than fight over our differences, and find strength to learn and grow together in the face of violence against all oppressed people: women, people of color, black people."

One woman, whose brother serves in the U.S. military, spoke about how he had made the ultimate sacrifice for America, even though his country had treated him badly his whole life because he was black.

"My brother fights for this country. He is in Germany right now, and this country doesn't give a shit about him," she said.

All of the photos are from November 24.

To read more about the November 25 Ferguson solidarity demonstration in Santa Cruz, with photos and video, see: Ferguson "Day After" Gathering in Santa Cruz 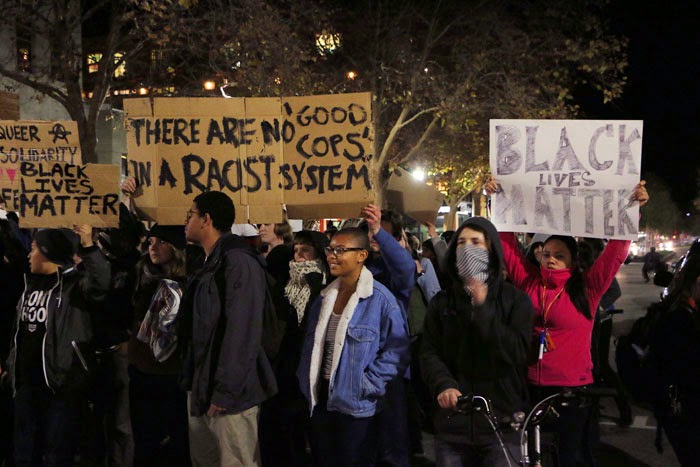 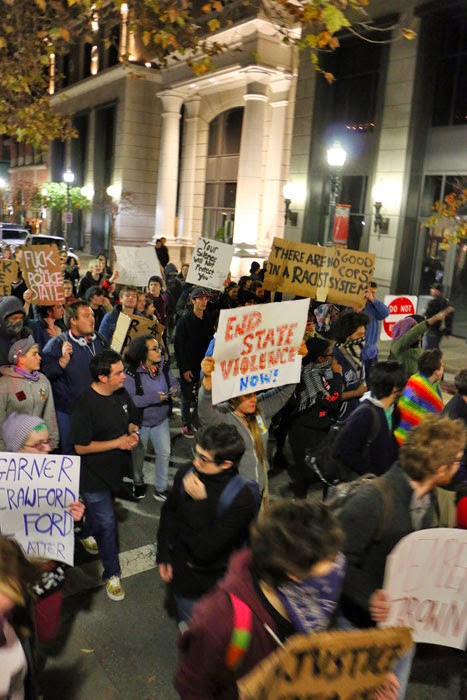 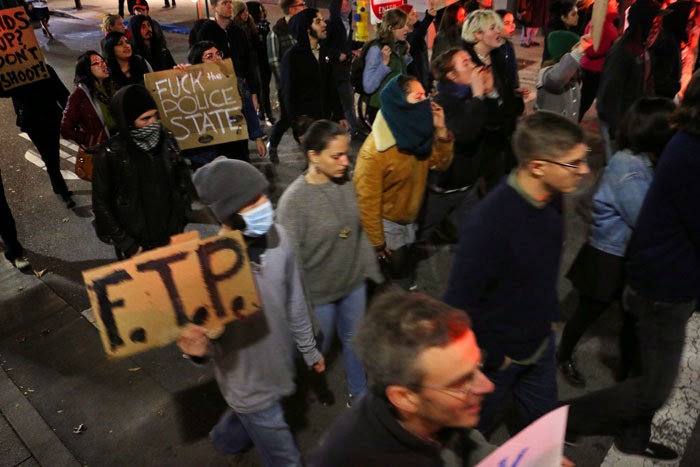 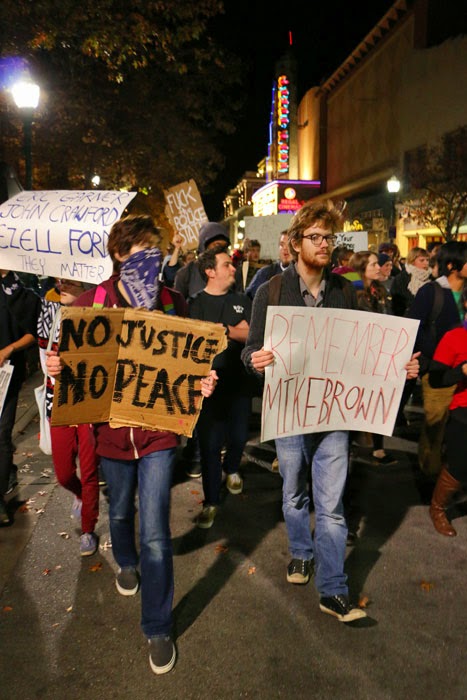 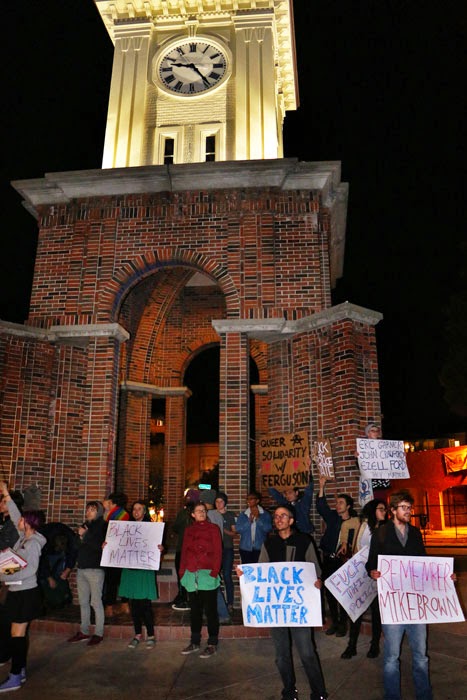 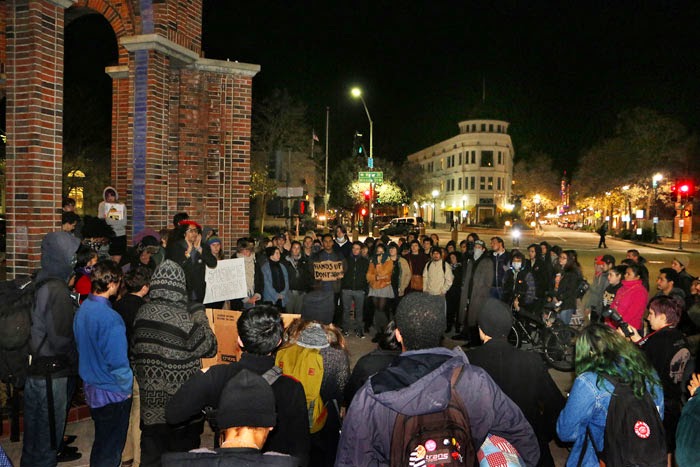 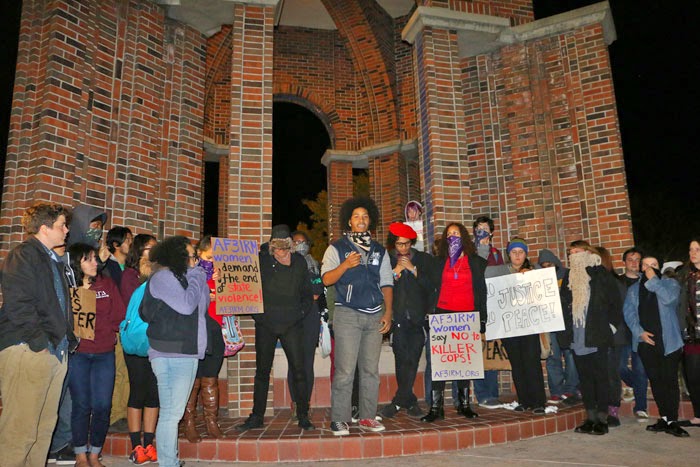 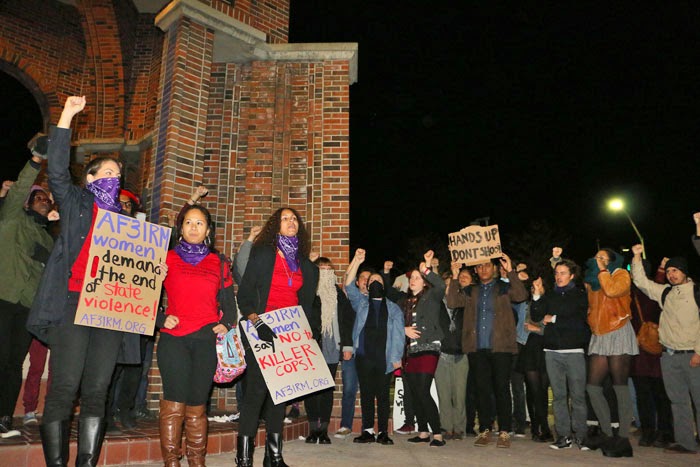