A small but dedicated group of "Freedom Sleepers" are facing all the conditions winter has to offer them as they continue to sleep outside of Santa Cruz City Hall on Tuesday nights. The rain stopped just before the beginning of the 28th community sleepout held on January 19, but the city hall area stayed wet all evening, as did some of the sleepers' possessions. Individuals, some with and some without houses of their own to stay in, have been coming together since July 4 for the sleepouts, which are organized to protest local laws that make homelessness and sleeping in public a crime. 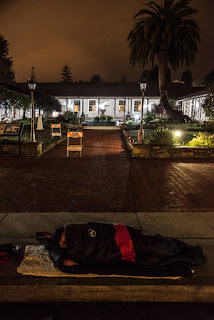 The City of Santa Cruz continues to take measures to prevent the sleepers from occupying the city hall courtyard and lawn area. The entire complex at city hall is closed to the public at night, and police have issued countless citations and arrested many during the course of the protests, in order to keep the area clear.

Security guards were on duty all night at city hall on January 19, watching over protesters. For months "Area Closed" signs have been in place surrounding the lawn area, and even in more puzzling locations such as the center of the main brick walkway that leads to council chambers, where the city council meetings are held.