Since August of 2012, six people have died while in custody at the Santa Cruz County Jail. On January 24, community members came together for a 'Cages Kill' rally and march to raise awareness about poor medical conditions inside of the jail, as well as to discuss the broader issue of the negative effects of mass incarceration, both locally and on the State of California. The rally was organized in response to the death of 65-year-old Sharyon Gibbs, who was found dead in the jail on November 5, 2014.


On November 5, commercial news outlets reported that the Santa Cruz County Sheriff's Department alerted the press to the death of Sharyon Gibbs, and sent out a notice that stated it was due to "probable natural causes." The full Sheriff's press release was never published publicly on the department's website. Follow up reports in commercial news outlets appeared in mid-December, reporting that Santa Cruz County coroners had determined her death to be caused by "heart problems" that were "naturally caused" by "cardiac arrhythmia related to heart disease." The Sheriff's department did not release this information to the general public on their website either.

According to her obituary, Gibbs worked in the health care profession and she attended Cabrillo College, where she studied Nursing. She was a 30-year resident of Santa Cruz County and a Mother of four, a Grandmother of six, and a Great-Grandmother of two.

The lack of details released to the public concerning the death of Sharyon Gibbs is in contrast to the greater breadth of information made available through an investigation into the previous five deaths at the jail, which was published by the Santa Cruz County Grand Jury in May of 2014.

Titled, "Five Deaths in Santa Cruz: An Investigation of In-Custody Deaths," the Grand Jury's report detailed the results of their investigation into the deaths, which occurred between August 2012 and July 2013. It found that all of five of the in-custody death cases involved failures by jail staff at critical points in the process of administering health and mental care.

The report found that the death rate in the jail during this time period was four times the national average, and that while heart disease and suicide were listed as the leading causes of jail deaths nationally during this period and accounted for half of all jail deaths, 60% of the Santa Cruz jail deaths were due to heart attacks or suicides.

"In some instances, individuals were incorrectly classified or not properly monitored. In others, inadequate treatments were applied," the Grand Jury Report stated. The report criticized both the Sheriff's Department's staff, which operates the county jail system, as well as California Forensics Medical Group (CFMG), a privately owned business which took over medical operations in 2012. The decision to privatize medical care in the jail was made by the Board of Supervisors.

"The Sheriff's Department and CFMG have publicly disagreed with almost all the findings of the report, and since then, another person [Sharyon Gibbs] has died," the organization Sin Barras stated in a press release for the January 24 Cages Kill rally. Sin Barras is a Santa Cruz based group that supports measures to reform jail and prison conditions, while also working on the broader long-term goal of prison abolition.

The march began at the Santa Cruz Town Clock and traveled down Pacific Avenue, eventually making its way to the county's main jail on Water Street. A wide range of speakers addressed the issue of mass incarceration along different points of the march. At the jail, individuals spoke in front of the main entrance as families entered and exited during visiting hours. Some visiting relatives stopped to listen.

The rally concluded at the rear of the main jail complex, where the group held an energetic and emotional noise/solidarity demonstration to let inmates know that people on the outside care about them. In response, inmates pounded on the windows of their cells, and some loud whistles could also be heard. At one point an inmate could be heard shouting out loudly from the inside, "I love you!!!"

Two of the speakers at the Cages Kill rally were local residents who feel that the poor medical conditions inside of the Santa Cruz County Jail were responsible for the deaths of their loved ones.

At the Town Clock, Jessica Espinoza spoke about the death of her uncle, local surfer Arthur Anthony Deans. Photos of Deans were featured in multiple issues of Surfer magazine in the 1980s, but the wave-rider's public acclaim soon became overshadowed by his personal struggles with addiction. Deans began using drugs while in his 20s, and as a result he found himself in and out of the Santa Cruz jail.

In November of 2008, Deans experienced a three-minute seizure while incarcerated in the Santa Cruz County Jail. His family believes he should have been taken immediately to hospital, but it took a month, after many complaints from them, for Deans to see a doctor at Dominican. After a cat-scan discovered a tumor, Deans received emergency surgery to have it removed. His doctor informed the family that a majority of the tumor was removed, but that they could have gotten it all out if Deans had been taken to hospital two weeks earlier. Arthur Deans eventually died in 2011, and his family believes he would still be alive today if he had received the proper medical attention after he experienced the seizure in jail.

"His voice needs to be heard," Espinoza said. "We need to honor him as well as all of those who have been neglected because they're incarcerated."

When the march was on Pacific Avenue, demonstrators blocked traffic at Cooper Street for a period of time. Fox Sloan stood in the middle of the street and spoke about her daughter Amanda Sloan, the 30-year-old mother of three who was found dead in the Santa Cruz County Jail on July 17, 2013. Amanda's was one of the "five deaths" investigated by the Grand Jury.

"My daughter Amanda Fox Sloan was allowed to commit suicide in the Santa Cruz County Jail in July of 2013," her mother said to demonstrators who were also standing in the street and listening.

"Amanda had suffered a loss of many very important, pivotal people in her life," Fox Sloan said.

Sloan stated that between 2010 and 2012, Amanda lost her father, her favorite uncle, an aunt, a couple of friends, and then finally her husband Jeff Smith, who was murdered in the driveway of their home and died in Amanda's arms on August 16, 2012.

In the wake of her husband's murder, Amanda became suicidal. In November she was pulled over by police and reportedly became irate, eventually leading them on a chase. She was in possession of a firearm and allegedly shot at officers during the chase. Authorities were not able to apprehend Amanda for some time, and she was named Santa Cruz County law enforcement's "most wanted" woman of the year.

Fearing for her daughter's safety, it was her mother that eventually gave police the tip that lead to Amanda's arrest, and she was booked into the main jail on multiple charges, including "discharging a firearm from a vehicle" and "reckless driving while evading a peace officer."

An article in the Santa Cruz Sentinel titled, "Mother of Soquel Hills widow Amanda Sloan grateful her daughter is safely in custody" shortly followed. In the article, Fox Sloan is quoted as stating she was glad her daughter was alive, considering the severity of the situation and the dangerous pursuit by law enforcement officers.

Amanda wound up being held in jail for eight months, but the Grand Jury report indicates the jail's staff was aware of warning signs that Amanda was in a state of intense despair near the end of her life.

"When Amanda was in jail she was told by fellow prisoners you will never see your daughter again," Fox Sloan said at the Cages Kill rally.

The Grand Jury report noted that three days before her death, Amanda was visited in jail by a friend who told her she would be losing custody of her children. According to the report Amanda, "became very upset and stormed out of the jail visiting area."

The report states that on July 16, the day before her death, officers in the jail say that Amanda was “very agitated and uptight," but medical staff had also reported that she appeared "happy and unusually calm." Some staff members believed that she was a risk for suicide because of "drastic mood swings." She had been held in the ‘O’ Unit for "mental health observation," but jail staff reports indicate she was returned to the general jail population six weeks before committing suicide. The jail's staff claims they did not have the authority to keep Amanda in the ‘O’ Unit for "an extended period of time," and that she had the right to be returned to the general population if she indicated that "she was feeling better" and "showed an improved attitude."

According to the Grand Jury report, the Sheriff-Coroner’s Office determined the cause of death to be "intentional asphyxiation due to hanging" and they classified Amanda's death as a suicide.

Immediately following her death, officers say they found a large hole in the wall of her cell. The hole exposed an interior pipe, which authorities say was how a "handmade noose" was attached. They say the hole had been hidden from officers in the jail by a poster covering it. The authorities also say they found a hidden a meth pipe and a razor blade behind other posters in Amanda's cell.

The Grand Jury report cited two Corrections Bureau regulations regarding cell inspections that were not followed by the Santa Cruz Main Jail's staff while Amanda was incarcerated.

The report summarized the protocols that were violated as follows:

1. Safety checks should be conducted at least once an hour. Officers should observe the inmate through the cell window, making sure they see visible skin, and verify that the inmate is breathing. They should document their check using the pipe log.

2. Inmates are not allowed to place anything on the doors, windows, or walls of their cells.

The "pipe log" is an electronic method used by officers in the jail to keep track of when officers have performed safety checks.

However, the video record for her unit shows that only the 10:21pm safety check had actually occurred. The Grand Jury report did not name the actual officers involved in these possibly fatal inconsistencies.

In addition to allowing the hole in the wall of Amanda's cell to exist, the jail's staff was found to have violated Correction Bureau protocol in a number of other ways. Authorities have also admitted Sloan's cell window was covered with a poster and her cell’s light switch cover, "had been removed and replaced with a poster."

Authorities say they found out Amanda was dead at 4:15am on July 17 when she did not show up to take her medication, and when they looked in on her they found her hanging in her cell.

At the Cages Kill rally, Fox Sloan thanked the Grand Jury for the "incredible job they did" with the investigation.

Sloan told the crowd at the Cages Kill rally that the jail's staff had tried to "suppress" and "keep hidden" the information the Grand Jury report had revealed.

"What do we do?" she asked community members and supporters.

"By the grace and power of God, we the people are going to change it."

Sin Barras released the following demands in advance of the Cages Kill rally:

1. The Board of Supervisors cancel its contract with California Forensic Medical Group.

3. Solitary confinement/administrative segregation and other forms of torture, such as the "restraint chair," be abolished. 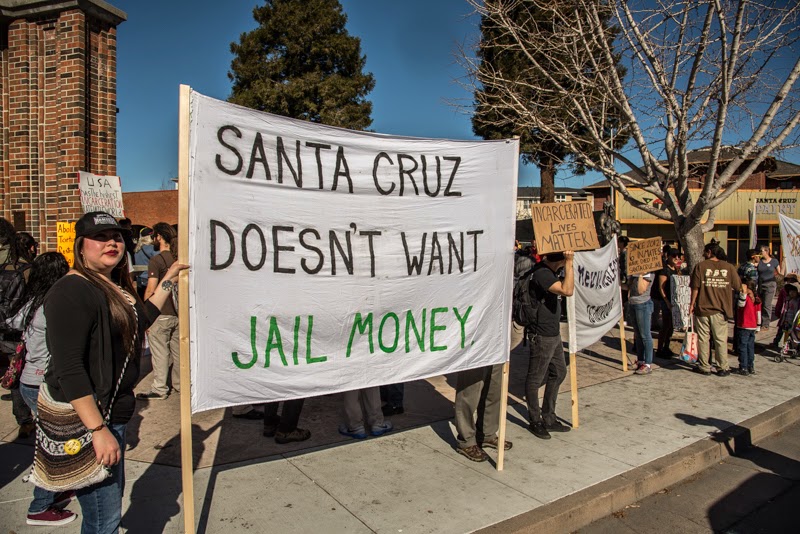 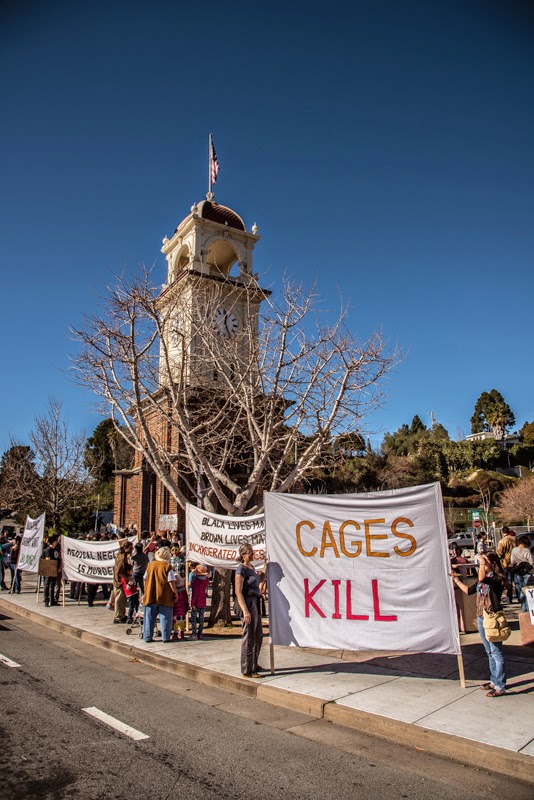 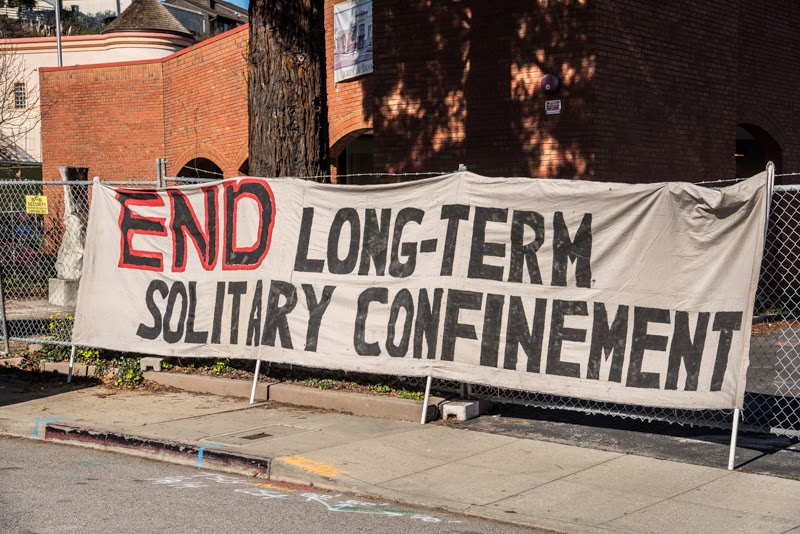 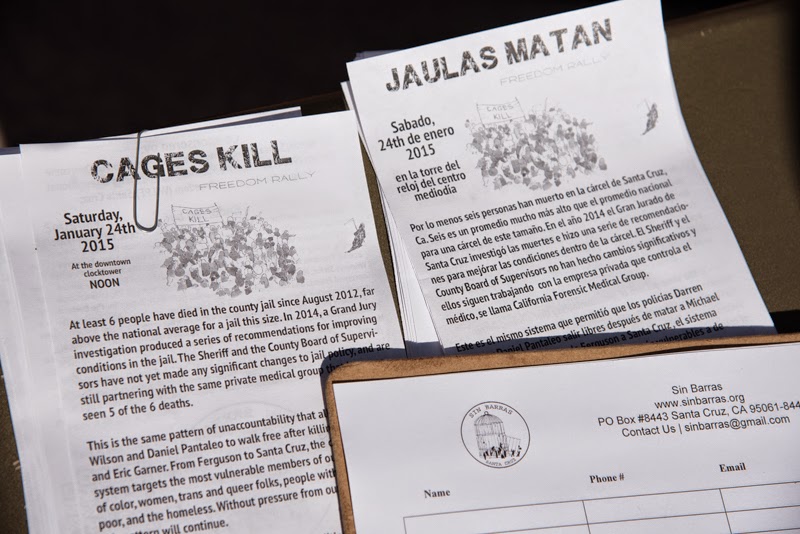 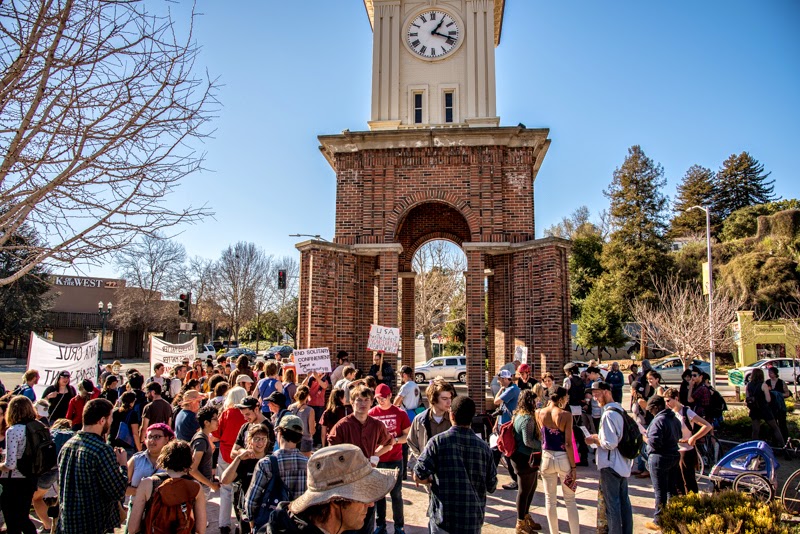 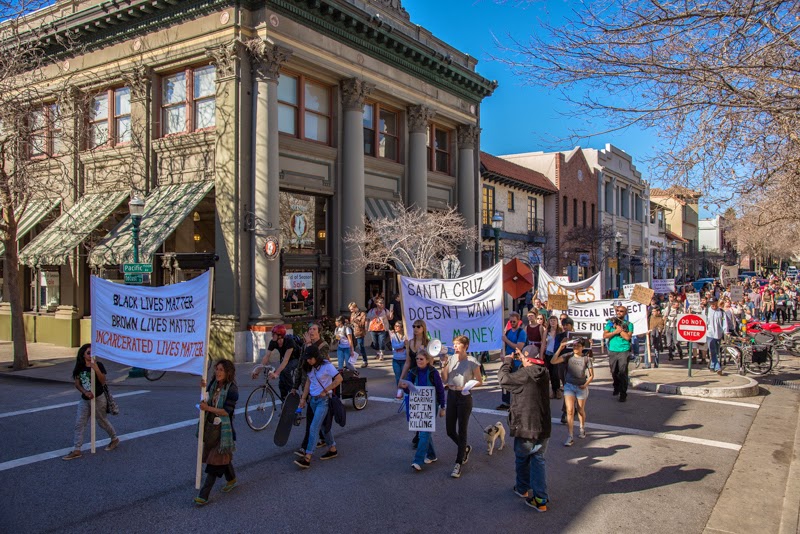 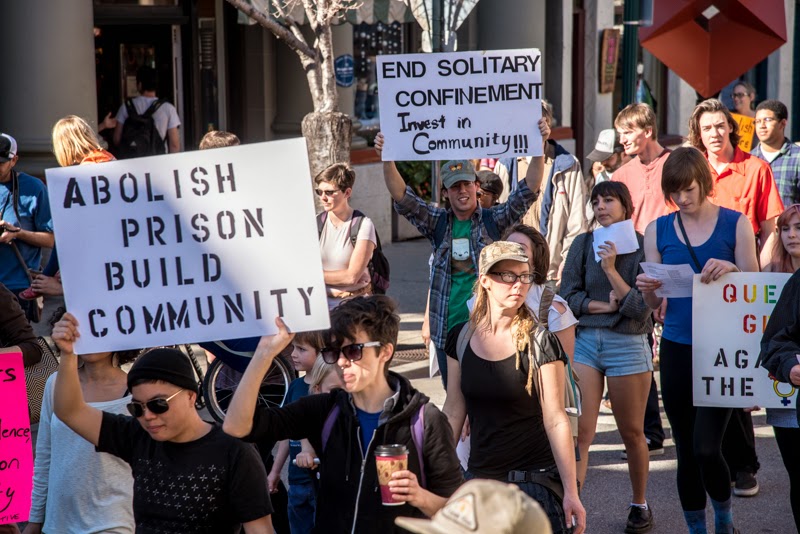 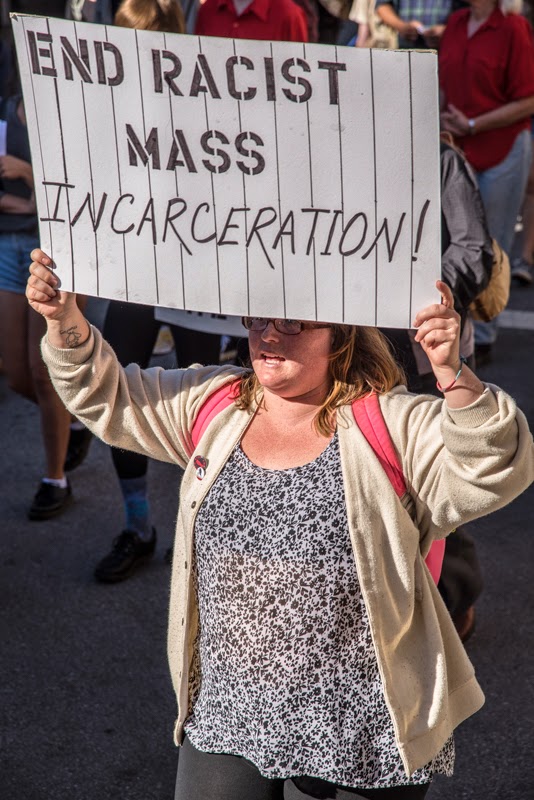 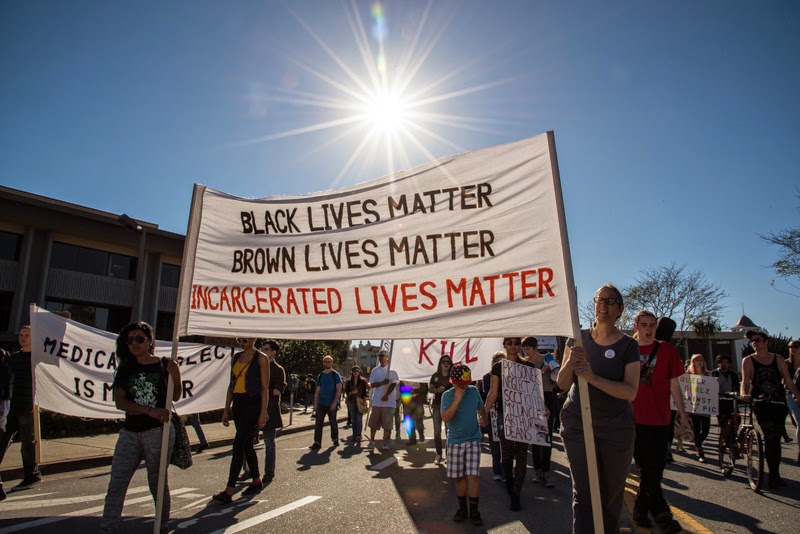 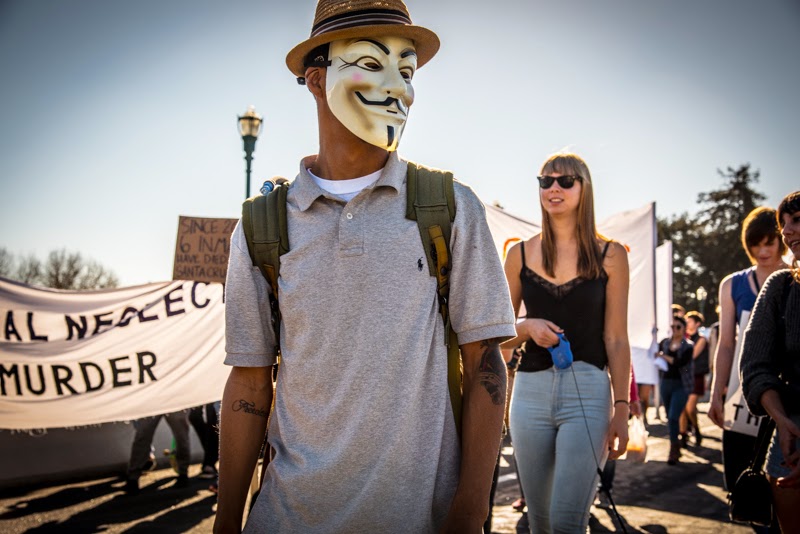 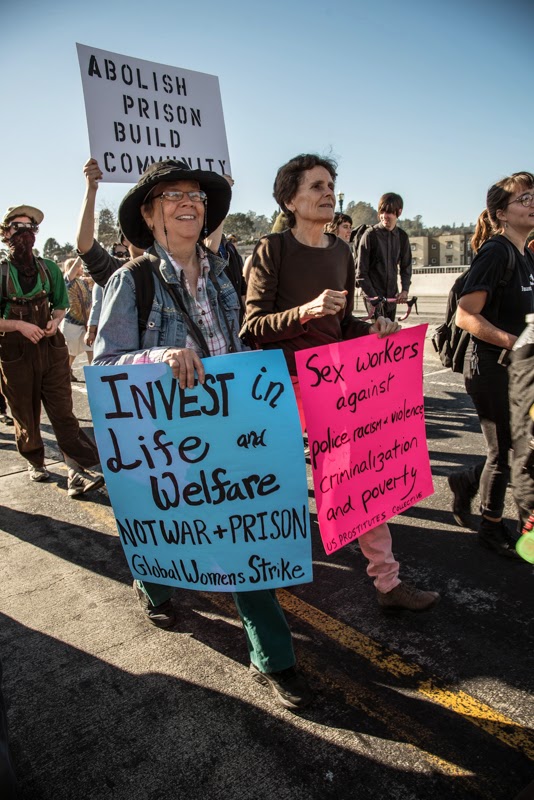 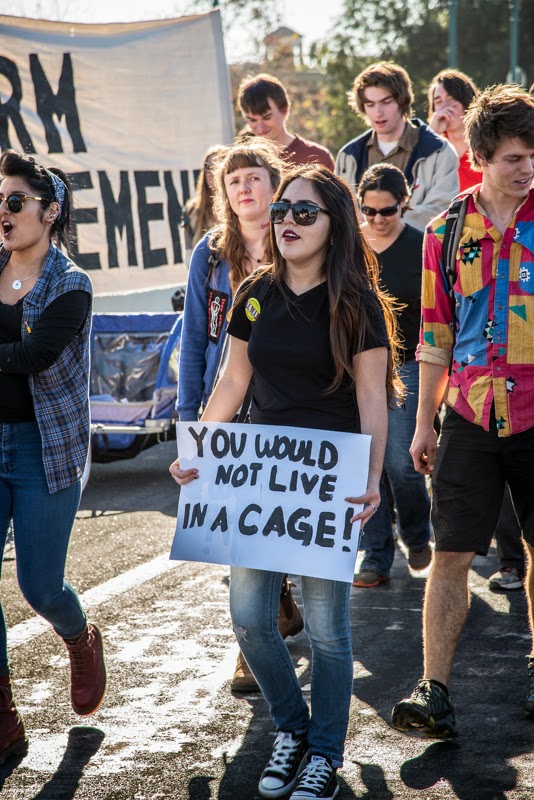 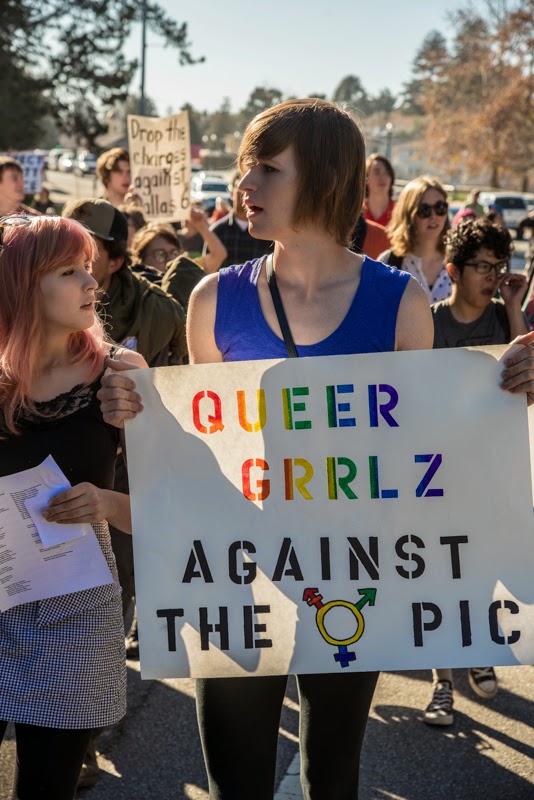 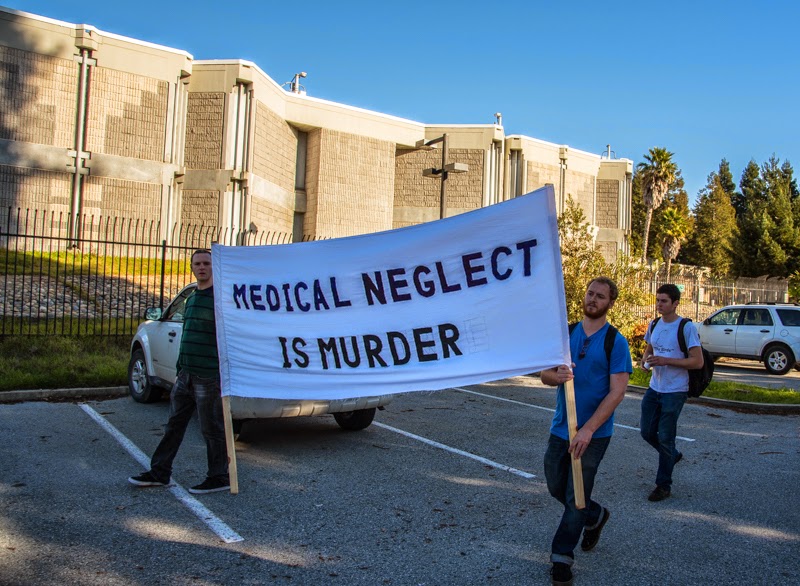 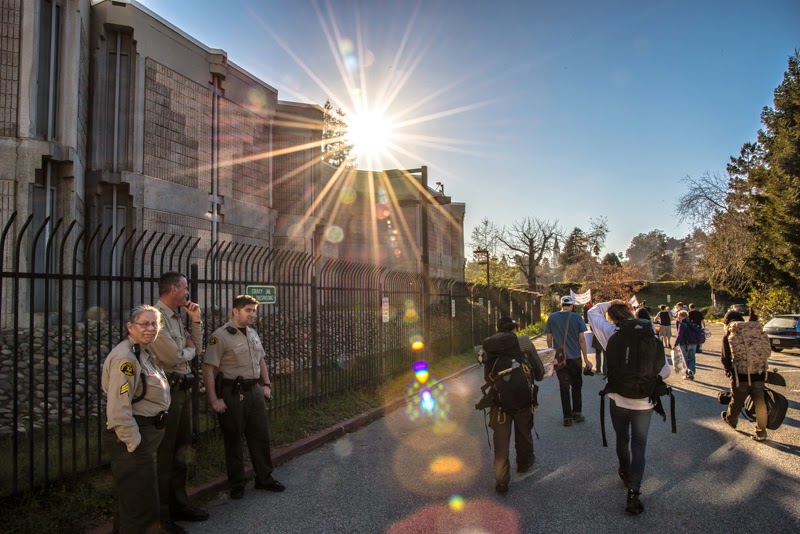