Activists "Carve Out" Space for Sitting and Relaxing in Downtown Monterey

Community members in Monterey returned to Alvarado Street on February 5 for their first sit-lie protest of 2016. The activists have been organizing protests once a month since February of last year to oppose the city's sit-lie law, which first went into effect in October of 2014. Future sit-ins will continue to be held on the first of the month, with the next protests planned for March 4 and April 1. 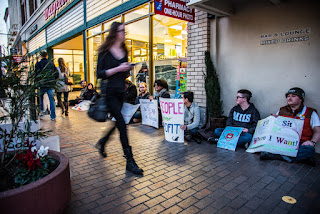 The sit-lie protests are organized by Direct Action Monterey Network (DAMN). Sec. 32-6.2 of the Monterey municipal code bans sitting or lying on most commercial sidewalks in Monterey between the hours of 7am and 9pm. Based on their outreach with Monterey's homeless community, DAMN believes the sit-lie ordinance is discriminatory and has been selectively enforced by police.

DAMN posted the following event announcement on Facebook in advance of the February 5 sit-in:

"On Friday, February 5th from 4pm-6pm we will once again sit down on the sidewalk on Alvarado Street in violation of Monterey's Sit/Lie Ban. Once a month, we carve out space for people to sit and relax and simply exist who would otherwise be kicked out by police/security.

"This ordinance is only one expression of Monterey's war against people without homes! End the criminalization of homelessness!

"The police have only given written warnings once in the past year of this campaign. After receiving a warning, you won't be cited if you don't do it again for 30 days. If you don't want to risk a warning/citation you can still stand near us and display signs.

"Meet in front of Walgreens on Alvarado Street in downtown Monterey. Bring signs and lawn chairs if you would like. Coffee will be provided! We will continue this action on the first Friday of every month from 4pm-6pm." 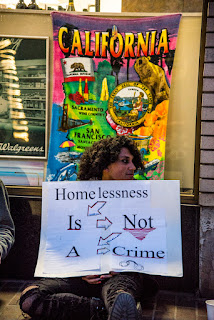 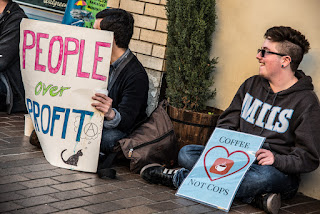 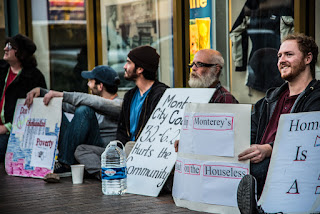 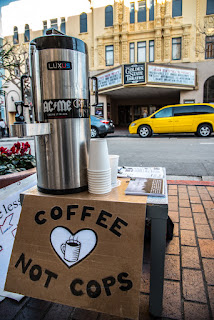 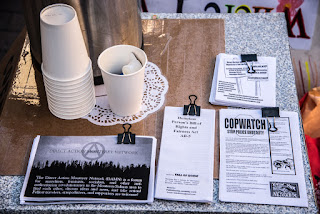 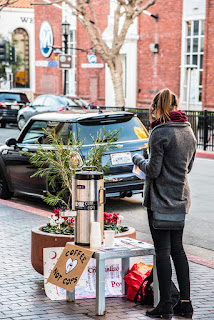 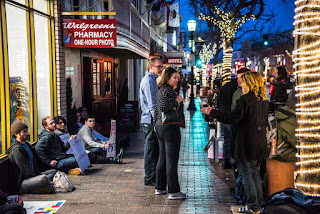 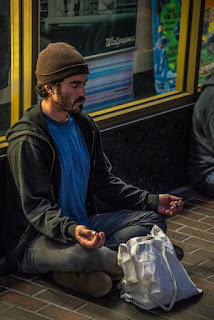