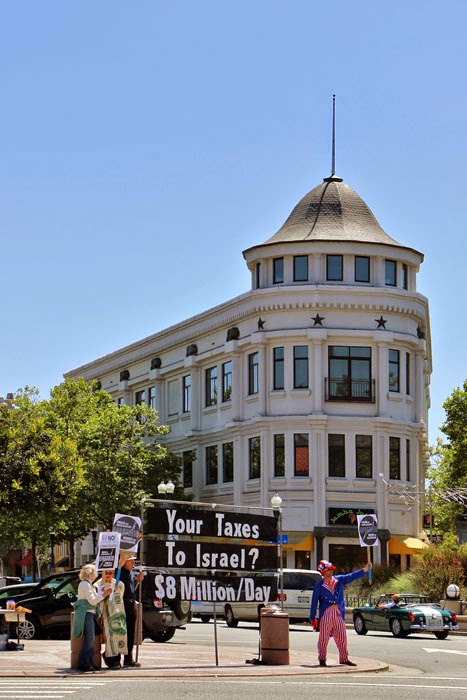 Tax Day is when federal income tax returns are due in the United States, and demonstrators held signs that indicated what the government should be spending citizens' hard earned dollars on, if the money wasn't wasted on military aid to Israel. They also held signs that read, "Apartheid: Wrong for South Africans, Wrong for Palestinians."

One individual was dressed as a 100 dollar bill, and the group distributed a brochure with information from the organization If Americans Knew. According to If Americans knew, Israel has been the largest recipient of U.S. foreign aid since 1976, and in the last 20 years economic aid to that country has been slowly phased out in favor of military aid. Israel receives about $3 billion ($8 million a day) directly from the United States in military financing each year, which is about one-fifth of what is allocated for the entire foreign aid budget.


Approximately 25% of the financing received from the U.S. is used by Israel to purchase military equipment directly from Israeli manufacturers. The only country allowed to do this with American aid is Israel, and their arms industry benefits from the subsidy. According to the Congressional Research Service’s report “U.S. Foreign Aid to Israel," between 2001 an 2008 Israel was the, "7th largest arms supplier to the world with sales worth a total of 9.9 billion.”
Posted by Alex Darocy at 4:36 PM