Two different political demonstrations were held during the first day of Alumni Weekend at UC Santa Cruz on April 25. Members of Santa Cruz Food Not Bombs protested an appearance by former CIA director and Secretary of Defense Leon Panetta, who spoke at 'Launch', an exhibition of various student projects at the university. At the same time as the Panetta protest, students in support of the UCSC 22 demonstrated at another Alumni weekend event, the Graduate Alumni Cocktail Hour, which was held at the Graduate Student Commons. 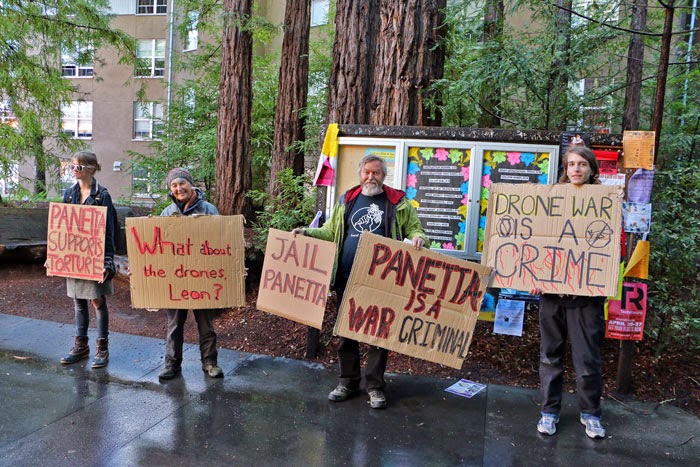 At the Panetta protest, individuals held signs with the statements, "Jail Panetta", "What about the drones, Leon?", "Panetta Supports Torture", "Panetta is a War Criminal", and "Drone War is A Crime." Issues highlighted in literature distributed outside of the event included Panetta's involvement with drone warfare as Director of the Central Intelligence Agency from 2009 to 2011, and his involvement in the thousands killed in Iraq and Afghanistan when he was Secretary of Defense from 2011 to 2013. The topic of Panetta's speech to the crowd inside was "America in the 21st century — is America in renaissance or decline?"

The event was held at the College Nine and Ten dining hall and cost $150 to attend for the dinner option, and $50 for dessert only. A number of local politicians were present, including Santa Cruz City Council member Hilary Bryant and 2014 City Council candidate Richelle Noroyan. When Santa Cruz Mayor Lynn Robinson entered the event, one demonstrator stated sarcastically, "its nice to see all of our government officials here."

Four police officers were on the scene of the protest and one asked demonstrators what time they planned to leave. After a short, awkward silence he then explained that the temperature outside was becoming cold and he wanted to go. Five or six UCSC community safety officers were also on hand. They were paying close attention to the protesters. One CSO could be heard saying on the phone several times, "We got protesters." The main duty of the public safety officers was to notify students who were arriving at the dining hall that it was closed, which had only officially been announced to them by email an hour before the event was to begin.

Santa Cruz Food Not Bombs serves free vegan and vegetarian food outside of the Santa Cruz Post Office on Saturday afternoons. Globally, independent chapters of the organization share food in over 1,000 cities to protest war, poverty, and the destruction of the environment. The organization is dedicated to recovering and sharing food, as well as changing society through nonviolent direct action. The first meal shared by Food Not Bombs was outside of the Federal Reserve Bank during the stock holders meeting of the Bank of Boston on March 26, 1981, to protest the exploitation of capitalism and investment in the nuclear industry. 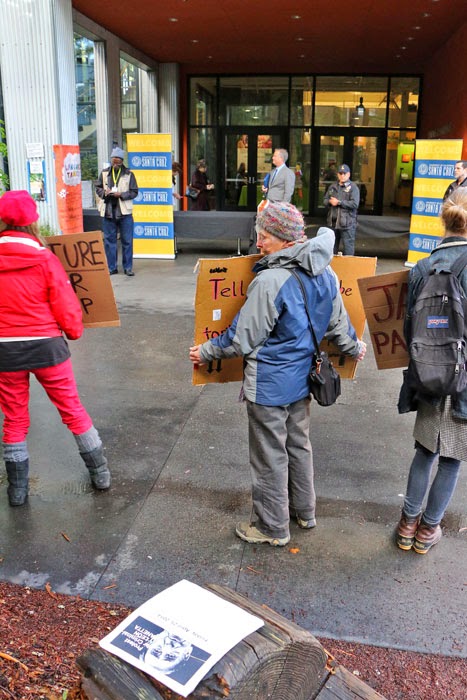 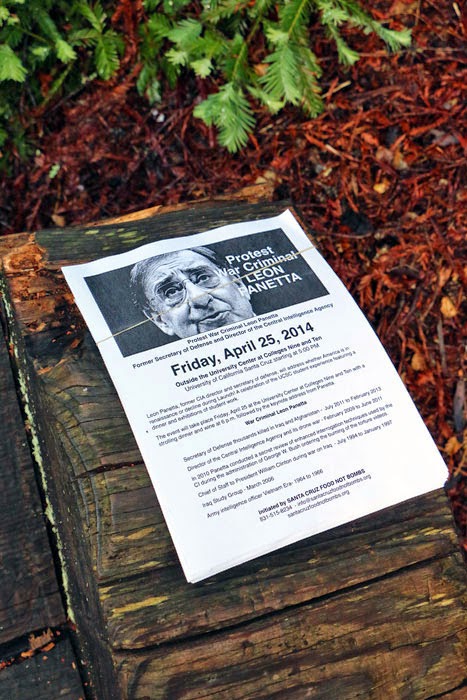 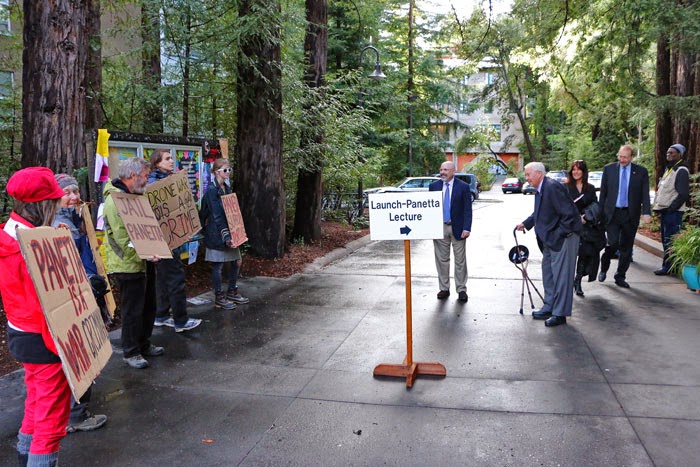 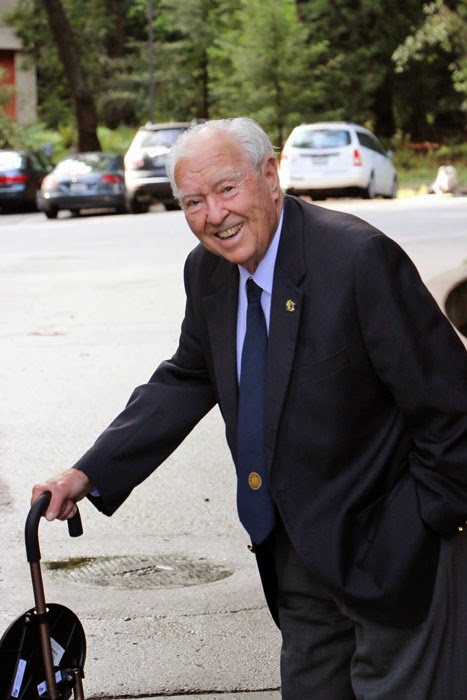 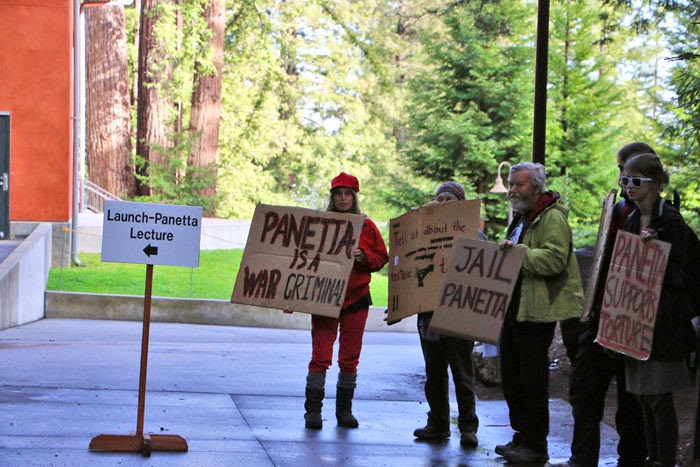 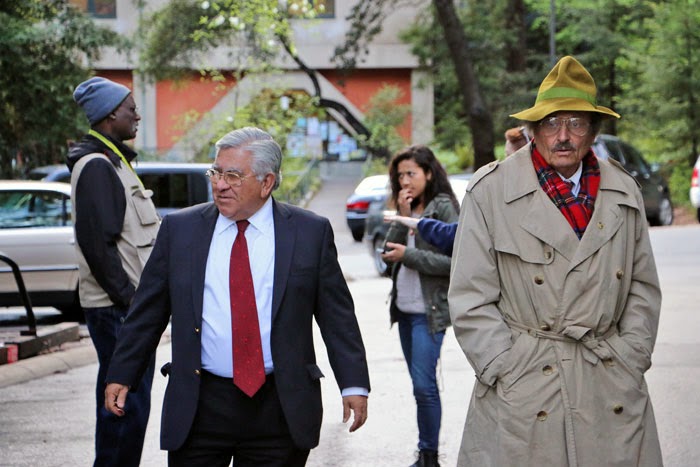 Support for the UCSC 22

The group of students who interrupted the cocktail social at the Graduate Student Commons spoke out against the charges the UCSC 22 face. They carried signs and left several fliers attached to the commons bulletin board, including a poster that read, "22 unjustly arrested so far, who will our admin take next?" During the social function graduate alumni mingled while sipping on drinks and nibbling on cheese and other snacks.

The UCSC 22 comprises 22 students who were arrested and charged in association with the UAW Graduate Student Workers strike that was held April 2-3.

Supporters have stated the students were engaging in a peaceful, legal picket line, and their arrests were part of a series of intimidation tactics used by the university which they say included the close video surveillance of those who participated in the labor action.

Most of the 22 charged face their first court hearing in Santa Cruz on May 6. 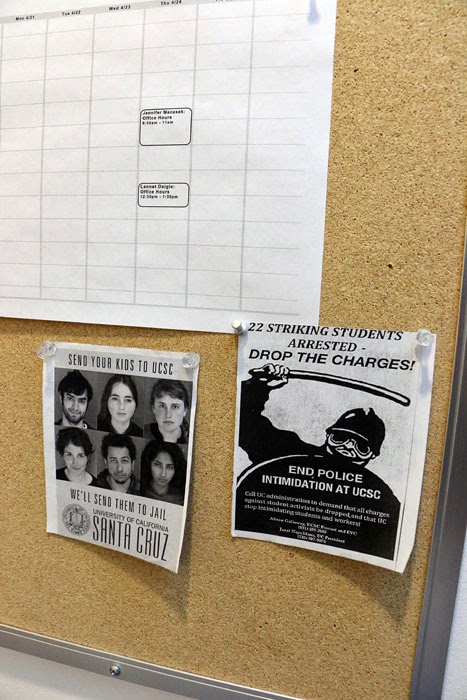