On June 13, a demonstration seeking justice for Jose Velasco was held on North Main Street in Salinas, the location where the 28-year-old was tased and beaten aggressively with batons by police officers with the SPD on June 5. Velasco's three sisters and his mother, Rita Acosta, were in attendance at the demonstration, as were the families of three of the men killed by Salinas police in 2014.

Velasco's beating, and subsequent arrest, was captured on video by multiple witnesses on June 5 after the Salinas resident was seen walking into the traffic lanes of North Main Street and exhibiting erratic behavior. Acosta was with her son that day, and she attempted to get him out of the street, but was not able to. She called emergency services for medical help, and individuals watching in cars on North Main phoned emergency services as well. Five officers with the Salinas Police Department arrived. Velasco was tased almost immediately, and then the police proceeded to beat him with their batons. One officer continued to hit him after he was pinned to the ground. Velasco was eventually transported to the hospital and then to jail.

Before the demonstration on June 13, Velasco's family visited him in jail. His sisters said he is still seriously bruised, and one said he has a "hole in his leg" that had to be "filled" with gauze bandages.

His family members have all been seriously affected by the incident, and were visibly exhausted and deeply hurt themselves. One of Velasco's sisters says she keeps seeing the video of the beating, and hearing her mother's 911 call, over and over again in her head. She said she is having trouble concentrating as a result.

Acosta herself works in the field of Homeless Services and said she never expected to experience something like this with the police.

Those at the demonstration are demanding better training for Salinas Police Officers. One sign held by individuals stated, "CIT Training Needed" and another read, "Mental Illness is Not a Crime."

Acosta held a sign that read, "Un Año Sin Justicia, No Es Vida" which refers to those killed by Salinas police in 2014.

The father of Frank Alvarado, Frank Sr., held a sign that read, "S.P.D. Cops Abusing Their Power - No Respect."

Frank Alvardo was killed by Sergeant Brian Johnson and Officer Scott Sutton, both of the Salinas Police Department on July 11, 2014.

Also in attendance at the demonstration were relatives of Carlos Mejia, who was killed on May 20, 2014 by Sergeant Danny Warner and Officer Josh Lynd, both of the Salinas Police Department, and Angel Ruiz, who was killed on March 20, 2014 by Sergeant Mark Lazzarini, Officer Daniel DeBorde, and Officer William Yetter, all of the Salinas Police Department. 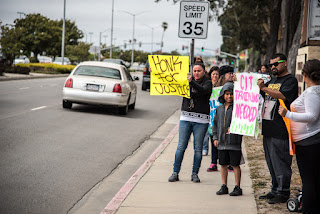 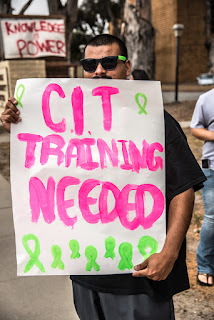 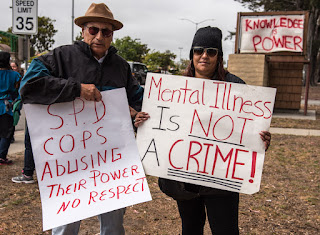 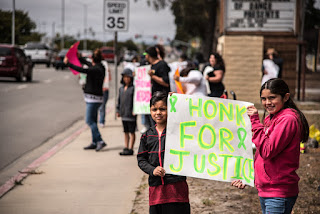 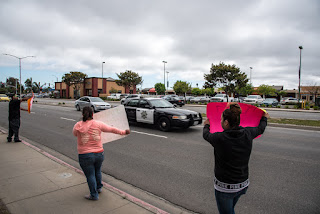