At their latest monthly sit-in, community members protesting the sit-lie ban in Monterey sat freely on the sidewalk on Alvarado Street for the first time since beginning their protests. At each of the four previous sit-ins, demonstrators were pressured to discontinue the protest, either by the police or by downtown business owners. They have been gathering on Alvarado Street monthly since February to oppose the new Monterey ordinance, which outlaws sitting or lying on commercial sidewalks in the city between the hours of 7am and 9pm. 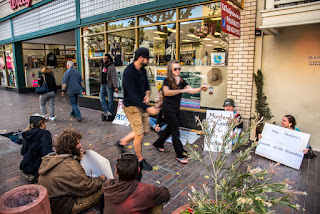 They have scheduled their demonstrations monthly to avoid being cited under the law. To receive a citation, an individual must first be warned by police. "No person may be cited for a violation of this section until a peace officer first warns said person that his or her conduct is unlawful and said person is given a change [chance] to stop said conduct," the ordinance (Sec. 32-6.2) reads.

"One warning by a peace officer to a person who is violating this section is sufficient for a thirty (30) day period as to any subsequent violations of this section by said person during said period."

Community members involved with Direct Action Monterey Network (DAMN), the group that has been organizing the demonstrations, say the sit-lie ban is a discriminatory law which targets homeless people and travelers. By organizing the sit-ins they hope to clog Monterey's legal system with citations.

So far no one has been cited at any of the demonstrations, but the city has expended a certain level of police resources in their responses to the actions. In February, six Monterey police officers watched the group of demonstrators for two hours, and at the May sit-in, three police officers issued warnings to over a dozen individuals who were sitting on the sidewalk. In March and April, business owners argued with them and threatened to call the police on the demonstrators if they didn't leave.

At the June 5 demonstration, approximately 16 people were in attendance, with about eight people sitting. As people walked by (and through) the group, one woman greeted people by saying, "homelessness is not a crime," and then offered them literature about the protests. Literature was also available on a table, along with free coffee.

Another member of the group of sitters that day communicated continually to passers-by that the sit-lie law is being, "selectively enforced by the business community."

Whether it was an example of selective enforcement or not, the demonstrators were left to sit free from police interactions on June 5.

Members of DAMN say they will continue to organize the actions on the first Friday of every month from 4pm-6pm. 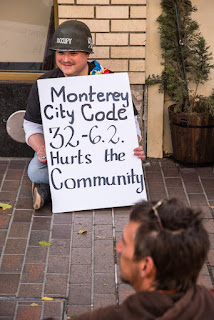 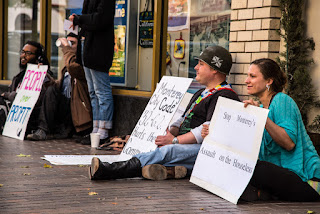 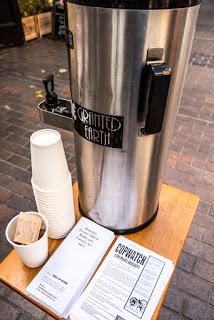 Photos are from the Monterey sit-lie demonstration held on June 5.
Posted by Alex Darocy at 6:59 PM