Local residents rallied is Santa Cruz on June 14 to oppose the Catholic Church's plans to canonize Junipero Serra this September, which was approved by Pope Francis. Serra presided over the brutal California mission system during its founding in the 18th century. The purpose of the rally was to educate the public about the Native American lives that were lost at the missions and the torturous conditions that were imposed there, as well as to encourage community members to contact Priests and other religious and spiritual leaders, including the Pope, in order to attempt to change his mind about granting Serra sainthood. 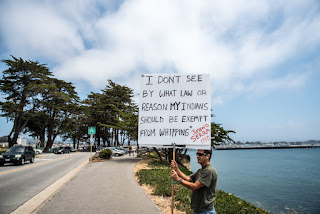 An event announcement released before the rally described the intentions of the participants:

"In Solidarity with our indigenous neighbors - we stand for a correct history. We stand for the greatness and the wisdom the native Americans hold. We stand because they are human like us and only want to live in a society of truth and understanding.

"Junipero Serra, the father of the California Missions, insisted that kidnapping, slavery and torture be used to forward his radical evangelical movement. Now the Catholic Church wants to cover up it's crimes against humanity in a shroud of Sainthood - but not before we help tell the real story - not before we stand tall with our indigenous neighbors in opposition."

The rally was held in front of the Catholic Shrine for St. Joseph located on West Cliff Drive. Individuals held signs and distributed fliers containing information about Serra's rule and accounts of the conditions endured by those in the missions.

One of the fliers described how Indigenous people hated Father Quintana of Mission Santa Cruz because of his penchant for flogging them "freely."

"He fashioned a horsewhip tipped with iron barbs to use against the Indians," the flier read.

A quote from Serra himself from 1780 was displayed on one sign: "I don't see by what law or reason my Indians should be exempt from whipping," and a portion of 1779 letter from the King of Spain, Carlos III: "Mission Indians Fate Worse Than Slavery," was displayed on another. 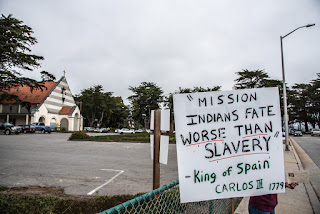 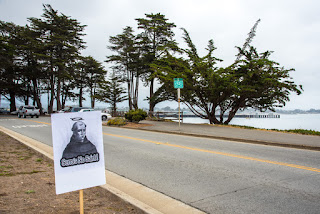